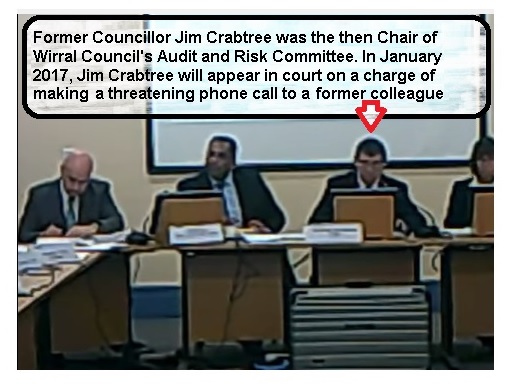 Audit & Risk Management Committee of 8th October 2014.  A turning point in the fortunes of this committee.  Link to news of former Councillor Crabtree’s court case.

We believe the series of events analysed here may amount to cases of malfeasance in a public office (criminal behaviour) by two very senior officials at Wirral Council;

Both have since departed their posts.

It is reasonable to suggest that following this occurrence, the Wirral Council Audit and Risk Management Committee process became rapidly compromised and in hindsight is neither capable nor qualified to perform its essential and critically important functions of audit and scrutiny.

The senior officers defending their corner have long appeared to display guilty knowledge coupled with highly-suspect, defensive behaviour when faced with justifying, responding to or dealing with BIG Fund issues, i.e. the subject matter of this post.  This refers to senior officers’ ongoing treatment of serious and detailed concerns involving suspect processes and large sums of public money, originally raised by two whistleblowers, Nigel Hobro and James Griffiths in the spring of 2011.

Blank refusals, obfuscation, and delay have been prominent and ever-present features of the council position ever since the matter was first raised back in April 2011 by Mr Hobro. Responses to Freedom of Information requests have been characterised by tardy, poorly-judged, misleading answers, which also point to a level of incompetence / misrepresentation / evasiveness on the part of Surjit Tour, Head of Legal Services and also some members of his department.

Both whistleblowers were not Wirral Council employees, which makes this case differ slightly from others, however the principles are the same.  They were both employed by Enterprise Solutions North West Ltd, a long-term council business partner, trading as “WirralBiz” – now defunct.

Both whistleblowers are extremely knowledgeable, qualified accountants who became concerned not just by the laissez faire, coasting, irresponsible attitude of senior and junior colleagues at WirralBiz, but by worrying evidence, mounting day-by-day, that all was not well, systems and processes were inadequate and a large amount of public money was ‘going missing’ or becoming routinely and mysteriously unaccounted for.

The BIG Fund was a scheme set up by central government which made available EU sourced public money grants of between £4,000 and £20,000 to qualifying businesses in the Wirral area.  The scheme’s main stated purposes were job creation and safeguarding of existing jobs and it was engaged in and undertaken by a number of other north west councils.

In October 2009, Enterprise Solutions North West, trading as WirralBiz, were appointed by Wirral Council as BIG Fund business advocate following a points-based procurement process.  This had also attracted interest from a number of other businesses who’d tendered their own bids – in direct competition with WirralBiz – for the position of business advocate.

After WirralBiz came out top, questions were raised regarding their suitability for the role, when it became apparent that they did not seem to possess the experience nor the qualifications necessary to perform the business advocate function.

But the scheme went ahead regardless.

Strict conditions had been laid down for Wirral-based businesses who applied for BIG Fund grants.  After being given permission to inspect initially four, later six files however, Mr Hobro noticed that large public money grants were being made available to businesses who did not appear to fit the bill – and even to some whose accounts details strongly suggested that they were on the brink of going bust.

Lockwood Engineering is a case in point.  It’s on the public record that this company, whose grant application was approved in May 2010, went out of business, lost control and stopped trading (i.e. a process of liquidation began) on 4th May 2011.

Once this process had begun, there was no way back:

On 5th July 2011, James Griffiths approached Kevin Adderley and Paula Basnett as a whistleblower and after being offered a job and refusing, was assured by Kevin Adderley “No BIG Fund recipient has gone bust.”

We can see this was clearly false, knowing as we do that Lockwood Engineering had gone bust two months earlier.

Mr Hobro began to place Freedom of Information requests with Wirral Council in October 2012.  As stated previously, he was met square on by a ‘fortress mentality’ – with the Wirral drawbridge defiantly raised in an arrogant gesture of non-co-operation.  This defensive mindset continued and wasn’t relaxed for a moment, particularly with regard to the more difficult and probing enquiries.

The only occasions when the council was prepared to lower its defences and comply were when the Information Commissioner stepped in, listing their concerns, and threatening the council with potential contempt of court proceedings.  These forced Surjit Tour to act counter-intuitively, i.e. in the public interest, as opposed to what had become the Wirral ‘ab-norm’, or the selfish interests of himself and his officers.

And bringing us bang up to date, today’s blog-post is one of these occasions.

We won’t trot out the ins  and outs, tos and fros or ups and downs and will jump to the very end, which arrived about three days ago.

The Information Commissioner had finally swept Surjit Tour’s desperate, irrelevant, nonsensical exclusions about ‘confidentiality’ to one side and issued the Council with an ultimatum:  release the information or we may refer the matter to the High Court.

Here is that information, prised out of Wirral Council five years on, with some explanatory annotations:

Just as a sort of precursor to the statement in question, here’s Graham Burgess limbering up, getting into his stride and addressing the Chair and fellow councillors at 3 minutes and 55 seconds:

To ensure you should be satisfied that this information is accurate and has been checked robustly, we have a number of things……………

A few minutes later, Mr Burgess, in the presence of his senior investigating officers then went on to commit what looks like his own act of malfeasance in a public office.  This occurred with no intervention from these fellow senior officers, sat to his right, who no doubt during their robust enquiries had seen the above list of 49 companies (withheld from the public for a whole year) including 7 companies in liquidation, yet sat mute, appearing to find no fault with the following statement:

Graham Burgess bears false witness to councillors, which is not corrected by officers whom in Graham Burgess’ own words had ‘checked robustly’ the information

Kevin Adderley bears false witness to councillors, which is not corrected by officers whom in Graham Burgess’ own words had ‘checked robustly’ the information

In summary, it’s necessary to present a couple of possible scenarios.  It’s unlikely that any other stark variations exist:

Graham Burgess and Kevin Adderley were kept in the dark about the 7 companies who’d gone under and were fed false information by persons unknown.  As they were simply ‘parroting’ what had been placed in front of them, and were therefore not fully complicit, their offence, if there was one, is mitigated.  However, this is serious stuff. If we were the CEO or the Director of Regeneration, we carry weighty responsibilities.  We would not allow ourselves to be exploited in this manner and, armed with the list, would personally (and very simply) research the Companies House website just to safeguard our positions and to double check the veracity of the information given to us to present, following our professional staff’s ‘robust’ investigations.

Graham Burgess and Kevin Adderley knew what they were presenting to councillors was false information, but went ahead regardless, and relied upon Surjit Tour and his legal department to find exclusions within the Freedom of Information Act to prevent Nigel Hobro and other members of the public from accessing the full information held within the list of 49 companies.

Although Mr Hobro knew the identities of some of the companies, he didn’t possess the full list.  This factor was what protected the body corporate in its mendacity, until time eventually ran out.

Since receiving the full list, Mr Hobro has made a further Freedom of Information request of Wirral Council, lodged today.  We will reproduce it below in its entirety, without further comment.

Campaigner for open government. Wants senior public servants to be honest and courageous. It IS possible!
View all posts by Wirral In It Together →
This entry was posted in BIG Fund Scandal. Bookmark the permalink.