I meet my “vexatious” accuser face to face !

I thought I’d turn up to yesterday’s 1:30 pm “Improvement” Board public meeting in Wallasey Town Hall.  I won’t post in detail on this meeting but will provide a link to John Brace’s blog, as I’m pretty sure he’ll make a very good job of that, along with providing a link to his own video of the occasion.

The five public servants in attendance at the meeting were:

The whole thing was described by the people out front as “relaxed and informal”, however sadly, this didn’t extend to the voicing of questions.   Most of the public gallery found themselves very much gagged, unless they’d lodged a question previously.  I found it pretty difficult to sit there and contain myself given the stream of denial, subterfuge, duplicity, minimisation, sheer evasiveness and general concealing gloss that poured forth by the bucket load, mainly via the now made permanent (but way before his ‘review point’) CEO Graham Burgess.

Anyway, I’ll now leave it to others.  So apart from mentioning the fact that Councillor Phil Davies, who looked uncomfortable throughout, departed the meeting before courageous whistleblower Martin Morton gave his address, this is where my take on these depressing events must end.

The main reason I’m posting is to describe the very brief  conversation I had with the Head of Law, who I bumped into in the lobby on the way out.  His name is Surjit Tour and he’s been the council’s monitoring officer ever since Bill Norman departed for pastures new at Herefordshire Council (loaded down with £151,000 of our cash).  I rang Wirral Council the other day, enquiring after the person responsible for branding 3 of my Freedom of Information requests “vexatious”.  I was told, “Surjit’s in a meeting.”

So from that point on, the penny dropped that it was not Rosemary Lyon (the name stated on the replies to date) who’d actually been dealing with it.  The “vexatious” brainwave seems to have originated from her boss – the top man.  Had he ordered her to put her name to it rather than signing it himself?  I don’t know.

Anyway, I walked up and introduced myself, then described how two of my FoI requests had been branded “vexatious”, and then how I’d managed to persuade the Information Commissioner to overturn them and find in my favour, thereby ensuring the council released the information or found another reason to state why they couldn’t.

I then asked him to consider, in this climate of austerity and council cuts, withdrawing the final “vexatious” rebuttal – in order to spare his very expensive time and to save a good wodge of our precious council tax payers’ money (which we all know to our cost has been frequently squandered hand over fist on doomed at the outset legal crusades).

His response was typical of the default, machinating, spinning, denying, concealing, minimising, defensive beast of a council that we’ve all grown to know and deeply distrust, and which operates entirely in a bubble of its own creation.  I’m paraphrasing slightly:

“We receive an enormous number of Freedom of Information requests here at Wirral.  How am I to know what you are referring to?”

Evasive and disingenuous doesn’t really come near to describing this.  Because when you’re a practising, professional, senior law person, and you’re brought down twice in succession by an unqualified ‘nobody’ – who’s lost both of his council jobs and whose main claim to fame is overturning two sets of bogus “gross misconduct” charges, then you’re going to damn well remember the name of your vanquisher.  It will be seared into your memory the same way the image of a 100 watt light bulb gets burned onto your retina if you stare at it for a while.

In fact, I’ll be surprised if some senior public servants haven’t got effigies of me that they stick pins in, when they’re not otherwise occupied sticking the boot in on disabled people, complainants and whistleblowers.

Yes, it was me.  Remember the name, because when I introduced myself yesterday, that won’t be the last time you all hear it.  In fact I predict one day you’ll be sick to the back teeth of hearing that name, particularly if you all decide to pursue your senior careers here at “refreshed and renewed” *nods to AKA* Wirral Council.  I live in Seacombe, so I’m never very far away.

Finally, here’s a link to the “Improvement” Board’s draft report.

To ease the flow of the strangulated jargon within, the following key words, which were seen to pepper both the Martin Smith and Anna Klonowski reports, have been carefully omitted from this one:

I haven’t read the “Improvement” Board draft report yet, nor have I done a forensic search for whatever other scandalous conduct may have been surgically cut out, but on the early evidence, the ‘unscrutinised machinations’ seem to have ascended to a whole new level, whereby senior officer behaviour that threatens legal consequences (see page 5 of Martin Smith Report – The Legal Position) is to be HUSHED UP and not addressed, all with the assistance of Joyce Redfearn’s “Improvement” Board.  I’ll get round to reading it hopefully soon.

And whilst on the subject of the Martin Smith report into abuse of power and bullying – warning – this is damned ugly to gaze upon, and those with finer sensibilities may wish to avert their eyes, but on yesterday’s evidence, Graham “Mistakes” Burgess and Phil (shameless, unapologetic, inveterate liar (see here, here, here, here, here, and here)) Davies appear to be content to leave this untouched, in its present, hideously got at form… They’re justifying withholding it by quoting the trusted favourite, ‘personal data’… 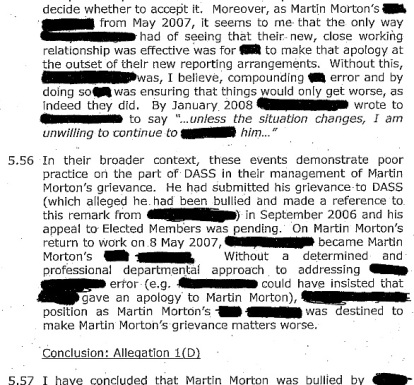 However… even a cursory glance through it reveals that they’ve obliterated a LOT more than just names.

5 Responses to I meet my “vexatious” accuser face to face !