SCROLL DOWN FOR LATEST NEWS…

My FoI request, asking for information about former Chief Internal Auditor, David Garry, was not vexatious.

More importantly, I, Paul Cardin, was not being “obsessive”, as deemed by a council solicitor – or whoever told her to say that.

I’ll tell you what; they tend to get rid of precisely the wrong people at Wirral Council don’t they?  But that’s how abuse festers isn’t it?  One or two ‘bad apples’ in positions of power, moral compass set to “gone west”, bigging each other up, employing their chumz, targeting and clearing out ‘troublemakers’, then scraping the barrel by treating their public as the ‘enemy’, to be engaged in battle, brought down and “crushed” by whatever means available…

…then before you know it, a reign of fear takes hold, the fish starts to rot, and the stench rises…  Haha.  Shouldn’t laugh though eh…?

Because this is deadly serious.

Today at least, here is a victory for common sense, and the legitimate and compelling public interest.  This is a line in the sand, however faint, however thin, but it’s still a form of reckoning.  They’ve been caught out bullying and abusing in the past, and now simply CAN’T be allowed to continue flexing those muscles…  over and over, with zero accountability.

One down, two to go

I rang the council today in an attempt to speak with the solicitor behind all this.  Her phone rang off without being answered.  I had a proposition for her.  I was going to ask her to withdraw the 2 x outstanding “vexatious” rebuttals that she’s lodged against a couple of my requests, very similar to this one…  both of which involve David Garry one way or another…

This would now be a practical move.  I was going to explore with her the notion that it’s highly unlikely she’ll prevail, let alone successfully land a glove on me…

I had a question for her:  how about giving up the ghost now, and not squandering any more of your expensive time, or our precious money, on a fruitless campaign of trying to save face against a lowly former lighting engineer colleague of yours?  OK, this Section 14 defeat may go down as a black mark against you, and a bit of a humiliation, but are you desperate to persist, and compound that?

I have sympathy for the exposed position she may find herself in, so I’ll continue to make time for her and try again on Monday.

Below are some much better scans of the ICO document.   All 13 pages.    Lucky for some.

When it’s up on the ICO website in about 2 weeks’ time, I’ll provide a handy link to it. **It took several months in the end due to an ‘error’.

The council have 35 days to respond and to either provide the information requested or give another reason for not doing so – or face an action under ‘contempt of court’.  Yes, that’s how this “Freedom of Information” Act works…  they still have scope to dust off another potential exemption and then run with it.  No matter that the request, and the first anniversary of its original submission arrives next week. 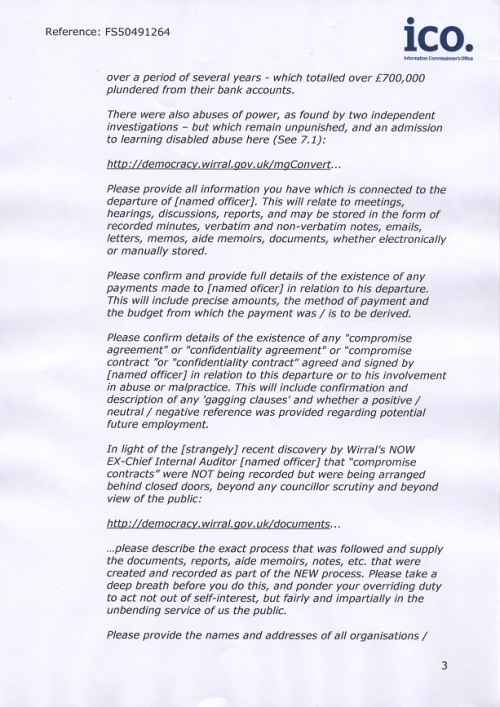 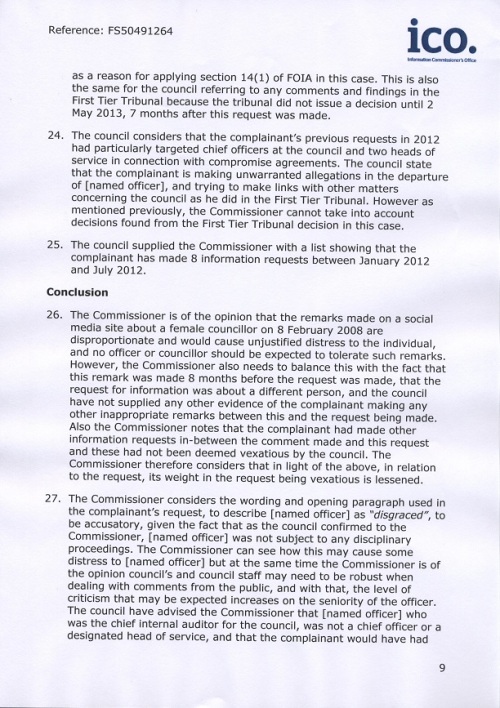 So, in the end Wirral Council had to cough up, and here’s what they were hiding from us “beneath the Cloak of Vexation” that was draped across my shoulders for many uncomfortable months…

It’s the previously exempt report.  The bloke who exposed the small matter that Wirral Council had an alarmingly incompetent way of recording “compromise contracts” (or not, as it turned out) was encouraged to sign a compromise agreement HIMSELF… before taking voluntary severance and the customary large pay off.

£44,423 wasn’t a bad salary for working a ‘flexible retirement’, or 21.6 hours per week was it?  Can I be reading this right?  Or are they explaining the situation very badly once again?

Of course, I’ll now be considering whether to ask for an internal review of this response.  I’m not happy that the council are once again wheeling out section 40, which I believe is only appropriate to SOME of the items they quote in their defence.

But as usual, it’s been another blanket response from Wirral, where virtually everything visible is swept up, lock, stock and barrel, and hurried out of sight, away from public view.

Despite being formulated and written almost two months ago, the above ICO Decision Notice has still not appeared on the ICO website.   Although I’ve recieved around a dozen of these in the past, this is the first time such a delay has occurred.  I’ll be ringing them in the New Year.

Campaigner for open government. Wants senior public servants to be honest and courageous. It IS possible!
View all posts by Wirral In It Together →
This entry was posted in FoI Requests, General and tagged chief internal auditor, David Garry, ICO, Information Commissioner, Paul Cardin, Section 14, Surjit Tour, Vexatious request. Bookmark the permalink.