Posted on December 7, 2017 by Wirral In It Together

A tweet came in this morning from HSBC whistleblower @nw_nicholas which immediately grabbed our attention.

It turns out this is a joint effort by four BBC journalists to pass on their expertise to our brightest and best kids.  Very worthy.

But on a closer look, is it?

You knew there’d be problems didn’t you?  Lol… and here’s one that struck us…

Shouldn't you be looking closer to home Tina and Kamal?

Let he who is without sin…….. pic.twitter.com/tptSqVGoGK

…if you travel around schools preaching from on high about the need for high standards of journalism, you need to tell kids about your own desperate, long standing & EXISTING failings ? 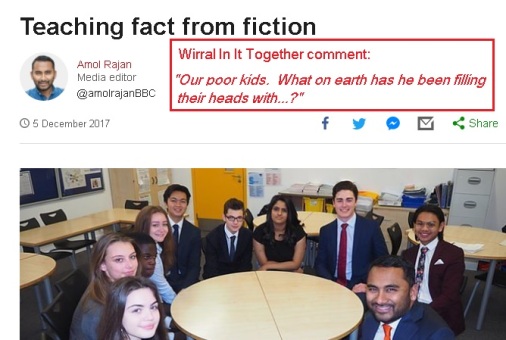 Amol “Teaching Fact from Fiction” Rajan is a media editor at the Beeb, and although willing to go out preaching to our kids about his own concept of ‘truth’, he’s also quite happy to sit there and say nothing when told in good faith about his own and others’ #FakeNews failings…

Amol cannot claim ignorance on this important and pressing subject.

Here’s a number of tweets we’ve sent directly to him over the last couple of years, as deliberate #FakeNews – designed to influence two Labour leadership elections – poured out from BBC journalists with a political axe to grind, and from the usual suspects at over a dozen national newspapers:

@amolrajan The Independent. Now printing dreamed up stories and not subscribing to IPSO https://t.co/b3pi5PHh6Y Where will it all end?

There’s also the unresolved issue of how the BBC allegedly promoted and nurtured Jimmy Savile’s unpunished, foul and depraved behaviour for over 40 years, but seemingly without any accountability for those very senior people who may have employed this group of journalists …a group who now seem very keen to get out there amongst our schoolkids, dispensing ‘truth’.

No response has come in from Kamal or Tina or Huw or Amol “Teaching Fact from Fiction” Rajan yet, but we’ll update you if / when one does.

Since posting this, Amol Rajan came on Twitter branding members of the UK public as “scum” and “idiots”. More here:

1. The BBC defends Amol Rajan, a senior employee, who was abusive, and may have defamed Paul Cardin

3. As Amol Rajan deletes his offending tweet, our complaint goes to Stage 2

4. Are the BBC’s apologies selective and weighted towards persons who wield power?

Campaigner for open government. Wants senior public servants to be honest and courageous. It IS possible!
View all posts by Wirral In It Together →
This entry was posted in #Brickgate, General and tagged #Brickgate, #FakeNews, Information Commissioner, Kamal Ahmed, Merseyside Police, Tina Daheley. Bookmark the permalink.