#Brickgate – Reports of ‘attempted break-in’ at Polish off licence, opposite Angela Eagle’s Office

It’s been a busy day today, and we’ve just been watching video clips from the Wallasey Branch CLP meeting called for 7 pm at Wallasey Town Hall by the local TUC.

This meeting was called in an attempt to attempt to clear the air regarding serious allegations of abuse and bullying that have been brought against the Wallasey Branch of the local Constituency Labour Party, which was followed by a suspension of the CLP.

The allegations have been brought by fellow Labour party members.

The meeting was a relaxed, businesslike affair and very well attended, with around 300 people turning up.

The purpose of this post is not to report on or summarise this meeting but to mention that the contents of one video clip in particular, brought to us by Liverpool Echo reporter Liam Murphy, introduced a whole new element to the #Brickgate incident at Sherlock House, Manor Road – an area we’ve been devoting much of our attention to over the last three weeks.  The speaker is Brenda Saunders of Wirral TUC and former chair of Unite’s Executive Council.

Applause for Paul Davies from the meeting plus "clarification" about the brick incident https://t.co/08Ywz7cRQQ pic.twitter.com/8kQmIZhMJw

The Polish off licence mentioned is the shop known as ‘Discount Booze’ next to the Royal Oak, possibly 25 metres away from Sherlock House and on the opposite side of the road.  The photograph here is reproduced courtesy of Google Earth / Google Maps:

Through word of mouth, we’ve learned that people living nearby, on the night of the broken window in Sherlock House, spoke of raised male voices either in heated discussion or arguing in the vicinity of the public footpath that runs alongside the north eastern elevation of Sherlock House – this path links Liscard to a large area of housing and is the side of the building where the broken stairwell window is located.

It seems possible that the breaking of this window may have been linked to the reported attempted break-in ‘through the roof’ at ‘Discount Booze’ and could have been a similar half-hearted attempt to break into Sherlock House.  The exact circumstances or chronology of these incidents isn’t known, but after making further inquiries it seems they were about a week apart, with the ‘off-licence’ incident occurring around a fortnight ago.

A reasonable assumption on the evidence of this, and of previously known factors e.g. that Angela Eagle’s office / window at the very rear of the building was never touched, that Chutney’s Indian restaurant, next door, have had their windows put through on more than occasion, leads us to believe that…crime happens.  Here are the Merseyside Police figures for Wallasey, with 88 criminal damage / arson incidents this year:

The broken window in Sherlock House was almost certainly not a politically-motivated action, that the numerous newspapers, TV and radio reports were mistaken and that Angela Eagle was completely out of order to make a suggestion to Jeremy Corbyn – via the newspapers – that he ‘calls his people off’.

Such wild insinuations actually border on the realms of fantasy, and are the kind of unhelpful conduct that we’ve come to expect from The Sun, The Daily Mail and others. It’s exactly the kind of irresponsible, groundless, blaming behaviour that Angela Eagle would usually be queuing up to lambast.

Is it any wonder that Angela has now finally lost the backing of the good people at the Wallasey branch of the local CLP?

Transcript of video.  Speaker is Brenda Saunders of Wirral TUC:

Brenda: “Just one thing I wanted to touch on before I move to everybody here is the brick through Angela Eagle’s window – the brick wasn’t through Angela Eagle’s window – it was through the offices she shared with other people.  The brick was at the front and her office is actually at the back, and the reason for it, there was an attempted break-in at the Polish off-licence over the road, but we didn’t see Jane Kennedy and everybody else at the Polish off-licence.”

Examples of two misleading TV interviews taken after the breaking of the stairwell window. Jane Kennedy, feigning surprise that so many ‘interested people’ happen to have turned up, and are thrusting microphones at her:

Merseyside Police & Crime Commissioner Jane Kennedy: "All of us as a society must say no. This is not acceptable." pic.twitter.com/Q7EjdpmRma

The least said, the better about this one, but the content speaks for itself:

Examples of 12 misleading national and local press articles published the next day:

Angela Eagle’s untouched office / window at the rear of the building and furthest from the main road. Photograph taken on 16th July 2016.

Agenda for the above 2nd August meeting at Wallasey Town Hall: 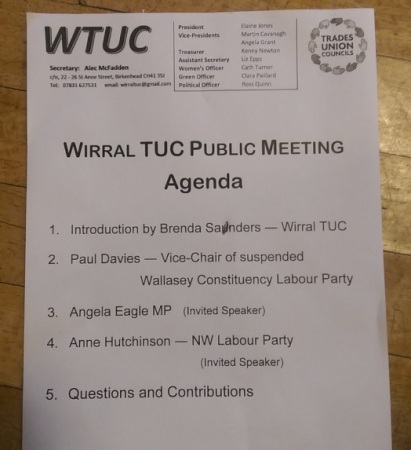 6 Responses to #Brickgate – Reports of ‘attempted break-in’ at Polish off licence, opposite Angela Eagle’s Office