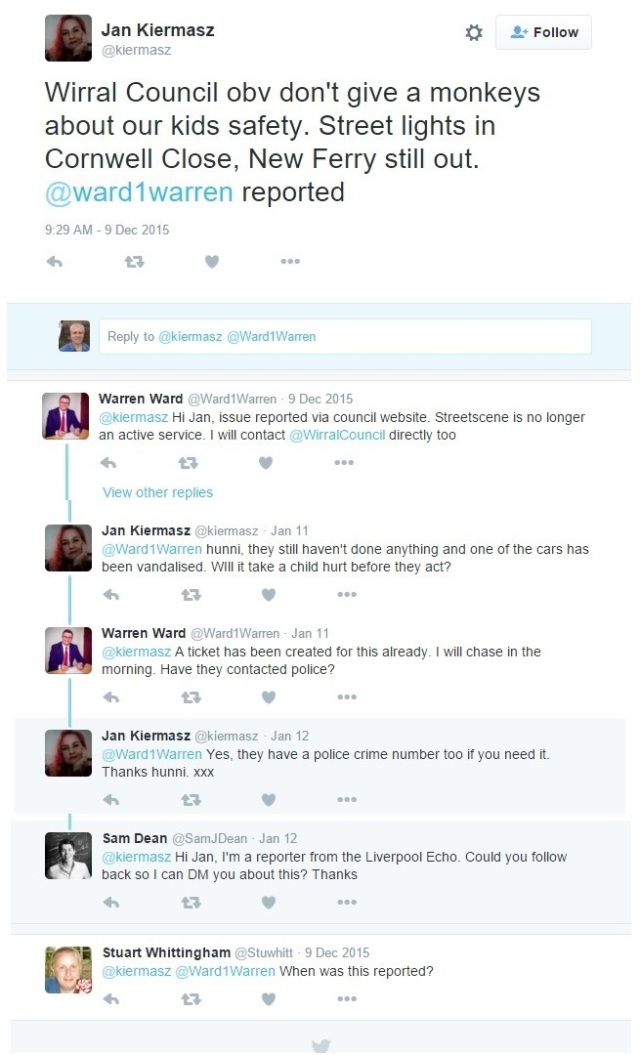 Here’s a story from the Liverpool Echo, by Sam Dean, dated 17th January 2016:

I posted the following comment on this story, which was accepted, but curiously was later taken down by persons unknown at The Echo:

And here’s a follow-up story dated just a week later:

These street lights have been out since the start of November.  I find this stuff interesting and quite alarming as I’m an ex-street lighting design engineer at Wirral Council.  I know how the place is supposed to work, and I was there when it did work.  I also recognise shameful bollocks masquerading as ‘reassurance’ when it’s ladled out from a large bucket over an unsuspecting public.

And that’s what’s been happening here. Despite 3 months of desperate pleas from local people across social media, through councillors and directly to the council, the lights have been out since November, i.e. all winter.  We accept these faults will take longer if they need to call in the electricity company to restore a live feed, but THREE MONTHS and counting?

What a lot of people know is that Wirral Council services and job roles have been decimated, for which the council leader enjoys blaming the government.  But what he can’t blame Osborne or Cameron for is how these cuts are implemented locally.

And what the public don’t realise is that the Street Lighting Section at Wirral Council has had a very blunt axe taken to it.

Some time in 2013/14, the position of “Group Leader, Street Lighting” became a victim of the cuts.  The person filling the role was a fully-qualifed and specialised street lighting professional of many years’ standing.  I know this because he was my manager when I worked there.  Anyway, he made it over the finishing line and retired, but his post ended there and then.

In order to pinch a few pennies, an assistant engineer was slotted into the job on a smaller salary.  I was told off the record that he was a ‘jumped up electrician’.  Now, the problem with this is: there is no substitute for the experience that was lost when the Group Leader, Street Lighting left the council. But neither the departmental Director nor his fellow councillor with departmental responsibilities sought out a qualified replacement.

So the public were shortchanged. Things were likely to go downhill very quickly …and down they went.

Here’s a few lines from a much longer report to council written by the former Group Leader, Street Lighting on the vexed subject of switching street lights off to save money, something Wirral Council did without proper consultation a couple of years back, under the then CEO Graham “Mistakes” Burgess:

“Switching off lights was not considered to be an appropriate
course of action for a predominately urban borough. There would
also be the risk of litigation in the event of an accident at a
site where the lights had been switched off.”

When the controversial subject of switching them off came up, this advice was ignored and not put before councillors, so there was no proper scrutiny undertaken before switching off 1,000 streetlights across Wirral.

If these choice words had been put before proper scrutiny, it’s unlikely we’d have been plunged into darkness. Failing in their duty made a curious kind of sense to those senior officers and councillors who were seeking to abuse their power and hoodwink the public.

One of the problems was 69 streetlights were switched off on the Dock Link North, the road where PC Dave Phillips was killed on 5th October 2015, during the hours of darkness. I don’t know for sure that these lights had been deliberately switched off on this date, but they were off according to information on the council’s website on the very same day:

I also emailed CEO Eric Robinson on 5th October 2015 to express some concern in what turned out to be a futile request for better information:

There was never any response to this email.  The link to the information on the council website no longer works, so we the public can no longer get at it.

I’m a prominent Twitter user, but can’t personally contact the councillor responsible for the shambles because he’s put himself beyond reach………….

…….but let’s finish on a happy note from 2013.  This was a time when the council DID see the need for a fully-qualified individual running the Street Lighting section……………