As readers may already be aware, we’ve reported what we believe to be a crime to the following organisations:

The Metropolitan Police – acknowledged by email – see below.

North Yorkshire Police – not acknowledged yet.

Here is the text of our submission, sent to the Electoral Commission and CPS this evening:

I wish to report a false statement being made by a senior election candidate which I believe breached the terms of Section 106, Sub-section (1) of the Representation of the People’s Act 1983.

The incident occurred on Friday 2nd June 2017 when a statement was made in response to an audience question during the BBC One programme “Question Time Leaders’ Debate – May versus Corbyn” which was broadcast live from the city of York commencing at 8:30 pm.

The subject matter was an allegation by Theresa May that her opponent Diane Abbott “wants to wipe the records of criminals and terrorists from the DNA database. That would mean we could catch fewer criminals and fewer terrorists”. I believe this to be false, potentially malicious, serious – due to the size of the TV audience and the potentially large number of undecided voters – and a criminal offence, and have reported the incident to both the Metropolitan Police and to North Yorkshire police.

Here is a link to a YouTube video of the incident. This should commence at the time the question was being put to the Prime Minister:

I have further information to send which would provide background, context and justification for my allegations, however the format of your reporting system prevents me from attaching files.

I’d be very grateful if you could acknowledge my message and advise, 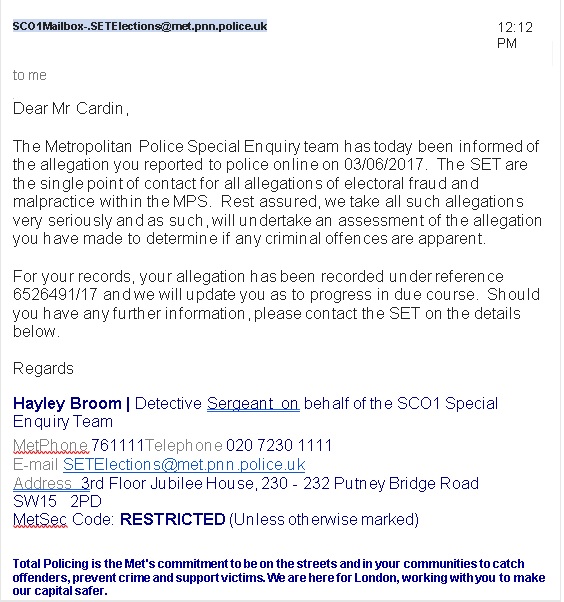