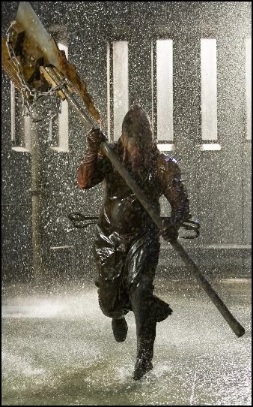 Spring is in the air, but there’s no spring in the step for a large section of Wirral Council’s junior staff, striving away – but with scant reward – in their Customer Service roles.

These are the frontline, public-facing workers who meet their paymasters face-to-face or over the phone on a minute-by-minute basis.  And damned good public servants many of them are too.  We’ve always taken our hats off to them because it’s the kind of deeply-demanding, stressful, think-on-your-feet stuff that would have the Stewart Hallidays and Martin Liptrots of this world up out of their executive swivel chairs, scrabbling and reaching for the Citalopram (Selective Seretonin Reuptake Inhibitors).

So where is the full-frontal attack on the basket case’s best people originating from this time?  Here’s a recent Wirral Globe article:

As we can see, the age old trick of presenting a crisis masquerading as an opportunity is deployed once again.

This is assisted as ever by the trusted ‘sword of Damocles’ – the potential removal of advertising income – dangling over the heads of the Wirral Globe if it steps out of line, and doesn’t bow to the demands of bullying Brighton Street, backed by Birkenhead’s Big Boss, lurking in the shadows.

So somebody’s being dishonest, the threat to staff has failed to appear in the press, and we’ll need to read between the lines.  We’re forced to rely upon the information provided by our council sources – as well as online council documents.

The curious phrase, ‘to free up staff’ appears in the Wirral Globe article.

It doesn’t expand on whether staff are freed up to perform more essential roles within the council or freed up to go and sign on at Birkenhead Job Centre.

Wallasey-based job-seekers now need to fund their own travel to Birkenhead since Dominick House, Liscard, was put to the sword by the Tory Government – right under the nose of lacklustre Angela Eagle – who was otherwise busy all last summer with #Brickgate #FakeNews, a failed leadership bid and the need to stir up phantom ‘homophobia, bullying and intimidation’ allegations, now collapsed.

A recent senior officer report lays out in glowing terms how wonderful the new system’s going to be after our money’s been invested, because there will be improved real-time access to the council’s services.

Except if you’re one of the growing number of forgotten and excluded non-internet-savvy citizens – usually the vulnerable, elderly or disabled – i.e. those who won’t be logging on via their iPad Pro (£1,029 RRP, John Lewis) or Google smart glasses (£694.59 RRP) any time soon.

No, they’ll need to rely upon dealing over the phone with the remnants left over from a once well-resourced, but now decimated service, looking like a bomb’s hit it.

Here’s the report Councillor Patrick will be flourishing before the Cabinet Meeting of 27th March 2017. However, to accommodate those wielding the axe – and not us – it’s been arranged for 10:00 AM:

And here’s the crucial section of this Fiona Johnstone report concerning the targets of the cuts, the as yet *unknown and unheralded number of staff soon-to-be earmarked for potential compulsory redundancy:

Apart from the above public commenter – no mention’s been made in the Wirral Globe’s ‘opportunity’ article of any threat to jobs.    We’ve tweeted Wirral UNISON’s Paddy Cleary with a heads up, although he’s probably gotten wind of it by now.

So good luck to those soon-to-be targeted for removal.  We fervently hope the process is undertaken in a mature, considered and businesslike fashion.  However, knowing the way this council operates, with top union officers and solicitors in its pocket, largely-compromised and reduced to issuing strings of weasel words, we expect it to be unfair, heavy-handed, defensive of the interests of a few “key / useful” staff – if you know what we’re saying – and a whole world away from dignified.

Readers watching the voting habits of Councillor Matthew Patrick will be interested to know that when the motion to reduce councillor numbers came up again recently, unlike his under threat customer service people, Patrick was going nowhere, and Councillor Steve Foulkes – he of #Wirralgate notoriety – found that it wasn’t necessary to reduce his colleagues’ numbers – presumably because if we didn’t have 65+1 councillors there to savagely hack away at vital services, how could we – in the frequent, seemingly-Tourettes-induced,  utterances of Phil Davies – continue ‘moving forward’  …  ‘moving forward’  …  ‘moving forward’ ?

Could Wirral be about to reduce councillor numbers from 66 to 44?

@Wirral_In_It got the report Friday and was briefed that 199 FTE will reduce by 50% ! BWB and Integration reports all going sane day 27/03