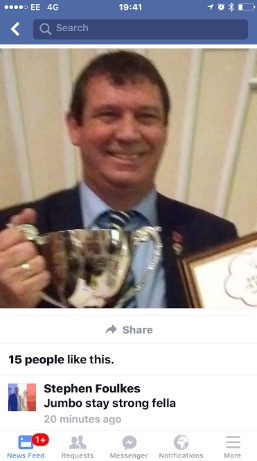 Jim Crabtree was given a 12 week prison sentence suspended for a year.

Crabtree appeared on one count of sending “a message that was grossly offensive or of an indecent, obscene or menacing character” to his former party colleague Councillor Louise Reecejones on 16th June 2016. He also received a restraining order banning him from contacting her.

For context – and crucial to the case – is the date of the offence i.e. 16th June 2016 – the same day Jo Cox MP was murdered, stabbed 15 times and shot 3 times, in the street, in her constituency of Batley and Spen.

Her killer, Thomas Mair, had shouted “Britain first” as he carried out the attack before calmly walking away from the scene. Mair was jailed for life in November 2016.

The wording of the message Crabtree sent is chilling:

A possible indication of Crabtree’s motivations appears in his Facebook account, details of which don’t appear to have been considered by the court today.

As we can see from the following screenshots, complete with dubious quotations, Crabtree, like Thomas Mair before him, appears to be either a supporter or an apparent sympathiser with the aims of this right wing group.

Leaving aside the disturbing notion that a one-time Labour councillor may have held far-right sympathies, this suspended sentence has implications for current Wirral Council leader Phil Davies – particularly given his and his colleagues’ long term failure to apply any disciplinary restraint upon Councillor Crabtree, who served as a prominent member of Wirral’s “Inner Ring” of Labour councillors – yet at the same time appeared to be a maverick and ‘beyond control’.

Davies had also forced through changes to committee structures following Labour’s / Crabtree’s success in the local elections of May 2012, allowing Labour members to increase their showing, to dominate as chairs and to outnumber their opponents in all the key Wirral Council member committees. 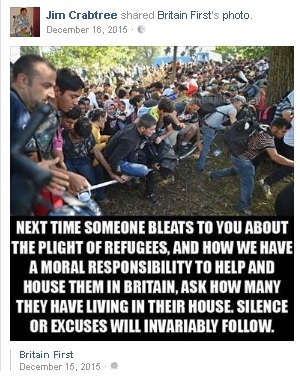 This calculated action – coupled presumably with Phil Davies’ consent – permitted Crabtree to become Chair of the council’s most prominent, high profile body, the Audit and Risk Management Committee in 2013, the low point of which was his chairing of the ARMC meeting of 8th October 2014.

But even before the incident of June 2016, Crabtree had frequently displayed grudging disdain for rules right across the board, be they party, Town Hall, central government or data related, and appeared contemptuous of having to be bound by them.

As the people of Bidston & St James ward were all too familiar, Councillor Crabtree – ‘a man of good character’ – so the court was told, was regularly courting trouble even before this incident.

His conduct both within the council chamber and without keyed in with an apparent unhealthy disregard for the need for calm, respectful, businesslike behaviour in the service of the public.

In other walks of life a tendency to rebel against officialdom might be seen as an admirable trait, but with Councillor Crabtree, the public looked on in horror as his shabby ongoing conduct was either passively endorsed by his seniors’ failure to act … or actively rewarded with swift promotion through the ranks. 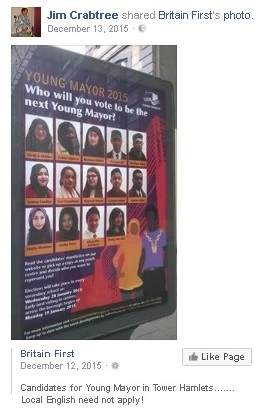 There was a clear distinction with Crabtree that was very revealing.  All his apparent grievances and rebellious motivations appeared grounded either in self-interest or in his own self-promotion, rather than any burning desire to help others.

This worked for him personally because up until his alleged deselection in May 2015, despite his atrocious behaviour and the widespread public misgivings, he was never pulled up.

So on he went, queuing behind the rest to be freely bestowed with the trappings of public office by his own party’s protectors and power brokers, Councillor Steve Foulkes, Councillor George Davies, and the current leader, Councillor Phil Davies, with the entire circus dancing and cowering by turns beneath the whip hand of ringmaster and controller Frank Field MP.

Crabtree’s frequent rewards for foul conduct may even have been carried out cynically to deliberately rub salt into the wounds of Labour’s alleged political opponents on the benches opposite.  In fact it’s inadvisable here on Wirral to try to conceive of any other motivation.

This Wirral Leaks article describes how – quite disgracefully – Crabtree was selected to represent Wirral Council by attending a royal garden party on the invitation of the Queen at Buckingham Palace in the spring of 2016. It’s not known whether he made it to London or not. 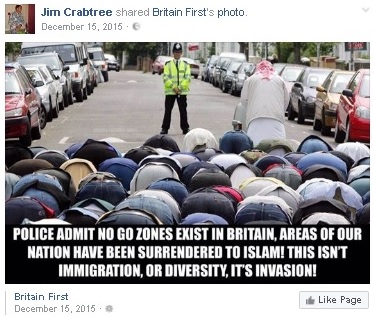 As hindsight kicks in, which it now must, Crabtree’s one-time controllers and reckless promoters may well be doing a swift double-take and trying to outdo their colleagues by jockeying for position as – whaddya know -‘architects of Crabtree’s downfall all along’.

Whereas in truth, they’re more likely to be regretting how they’d sat on their hands for many years, allowing Crabtree carte blanche to fill his boots, and full scope to get away with …

Link 2 – Rotten to the Core