On 23rd May, we posted the following tweet to @SaveUKjustice  amongst others…

…and received a response two days later from @SaveUKjustice as follows:

If the inconsistency here doesn’t leap out at readers, we’ll explain the situation.  As usual, we’ve posted what is a pretty straightforward tweet holding two links.  These form a juxtaposition between two different groups of persons who are both granted protection (as we all are) under the Human Rights Act.

The first loose and general grouping (although not specified or described here) is that of relatively wealthy persons, often professionals with independent means and access to justice – people like celebrities, high profile politicians or prominent judges and lawyers (the newspaper story here can be accessed by clicking the first link).

The second and probably much larger grouping (again not specified or described) is vulnerable and disabled persons with increasingly limited access to justice (details of two examples of abusive treatment can be accessed by clicking the second link and following the links held there).

The purpose of posting this was to highlight what seem to be stark inequalities of treatment under the same umbrella of the Human Rights Act.  Lately, I’ve been tweeting such examples to persons who’ve been claiming that the Act is precious to them and that they’re determined to protect it.  I tend to get in there and ask awkward questions.  As a result I’m being blocked by @MarkFergusonUK (editor of LabourList) and ignored by @AdamWagner1 (prominent Human Rights lawyer).  More examples of that here.

When you analyse the @SaveUKjustice response (above), it appears that he’s not followed any links to abuse of disabled people, and seemingly because of this, believes that WirralInItTogether are claiming their human rights have been breached because they’ve been blocked on Twitter by @MarkFergusonUK !

It’s an unfortunate error to make (and probably one that many of us commit on Twitter when we get drawn in on our pet or specialist subjects !)  The desire to want to leap in and fire off an instant reaction without pausing is hard to resist.  I think this may have been what’s happened here, and it’s forgiveable and understandable.

So we responded as follows, reposting the original link to the abuse of disabled people. Nothing was coming back, so we followed up with some background information to assist:

A response did come back, but it quickly became clear he was holding his ground.  He even went on to compound his misunderstanding and the failure to acknowledge it, by accusing me of ‘trolling’… 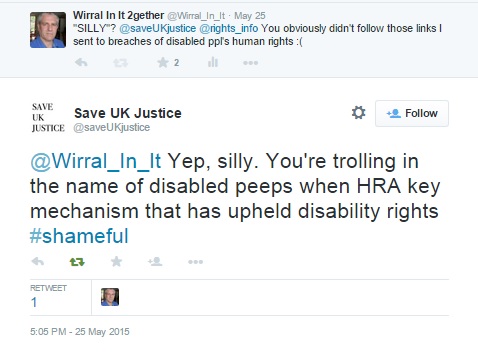 the violent abuse suffered more recently by the Mainman

– because he was claiming, globally, that the HRA had ‘upheld disability rights’.

The horrific Winterbourne View abuse and a high level intervention followed by a report part authored by Norman Lamb MP had also occurred.  I was now becoming concerned that he didn’t have a clue what he was talking about, so I thought it was time to research @SaveUKjustice and get a bit of background.

Very quickly it became clear that it was run by someone called Patrick Torsney, who appeared to have had a remarkable measure of success with a relatively prominent organisation known as ‘ilegal’.  This is worth googling to see the achievements it has made since its inception.

I now had a bit of a quandary building.  The remarks made by the person on the other end didn’t seem to be emanating from Patrick Torsney.  How could they be?  Was it an intern sitting in on the bank holiday?

But I couldn’t know that without asking the question.  I was also thinking… ‘how could an anonymous person, hiding behind the grand title of ‘@SaveUKjustice’ have the gall to brand somebody who is obviously not anonymous as ‘trolling in the name of disabled peeps’?

So I sent the following tweets:

Okay, we regret the reference to the ‘little ball’ in the last tweet as it’s derogatory. Although I (Paul Cardin) was a little upset after being unfairly branded as ‘trolling’.

We’d now asked for his name, but as so often happens in these circumstances, the person making the accusations didn’t have the courage to come forward and identify himself.  It seemed it was okay to pour forth with insults, but when challenged, the customary and timeworn option was taken – that of receding back into the shadows…  and safety.

Expecting the worst, we then checked and found we’d been blocked by the following:

With both orgs now blocking us, the implication we drew was that yes, this was highly likely to be Patrick who’d been sending the tweets.  We sent the following, just to make our own followers aware of the situation: 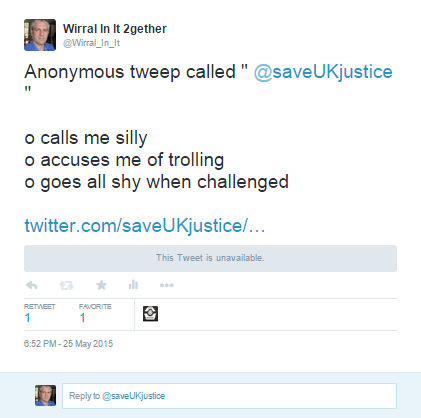 If Patrick Torsney ever reads this e.g. if somebody sends him a link to it, he may have second thoughts, start acting in the public interest, and may finally get round to reading what we’ve been involved in locally at Wirral In It Together, and who knows, maybe even apologise for his rash behaviour.

That’s if it was Patrick Torsney.  We may never actually know for certain.

Campaigner for open government. Wants senior public servants to be honest and courageous. It IS possible!
View all posts by Wirral In It Together →
This entry was posted in General and tagged patrick torsney, SaveUKjustice, wirralinittogether. Bookmark the permalink.