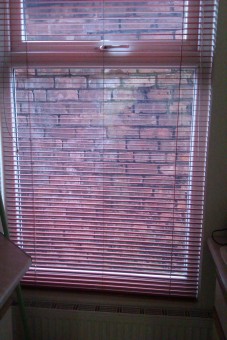 I spoke to investigator Rob Vickers today re: the FoI request below, which was made a while back.  I’d left a message last week and he was good enough to return my call today.

We discussed the following topics:

I thanked him for returning my call.  He told me that he used to work at St Helens Council, and after ‘retiring’, was out of work for six months.  He then started up his own company, “ROBERT VICKERS SOCIAL CARE CONSULTANCY LIMITED“.  I wasted no time in conveying my concern that his company had presided over a disgusting whitewash, the effect of which had been to draw a blanket over the council’s illegal four week delay in care – which had lasted for 2 years, but was very quickly dropped when Andy Campbell blew the whistle on it.

He said, “That’s just your opinion.”  I said it wasn’t just my opinion and that numerous members of the public were making their feelings known on the Wirral Globe website – which over the years has become a reliable barometer of public opinion here on Wirral.  I recommended that being a public servant, he should go online and get an idea of the impact his whitewash was having on the people he serves.

He replied that he ‘didn’t need’ to go and look.

We talked about the assumed independence of his report.  I stated that it didn’t matter how many times you stamped that word on it, the public regarded the whole thing as invalid.  This conclusion was arrived at after Vickers’ ex-colleague Steve Rowley had sent me an email:

In it he said that prior to carrying out his investigations and producing two reports, Rob Vickers had never made the required declaration to satisfy the public that he had no prior connection or affiliation with Wirral Council, and hence no axe to grind – or nothing to GAIN by arriving at any particular conclusion e.g. what actually came to pass ~ a nice contract, and more ££work for his company.

So despite the one-sided, bogus grilling of carefully selected senior staff, all done as a carefully choreographed pretense, the whole thing was flawed right at its inception.  I reminded him about rigour, and that he hadn’t interviewed any social workers or any whistleblowers – to get an idea of the impact on the people operating ‘at the sharp end’, and the service users themselves.  For his investigations to be fair and comprehensive, this was absolutely essential.  But the problem for Mr Vickers was…. it would have ended with him arriving at a diametrically opposite conclusion to the actual one.  Which may have prevented him landing a job at the council.  Of course, this was unremarkable…. to Rob.  He still didn’t see a problem with it.

He said, “We’ll have to agree to disagree.”

I’ve had this throwaway comment chucked in my direction a few times on my travels, and usually by mendacious, snivelling lackeys, half-way up the greasy pole.

I said, “If I had the money, I’d take the council to court and wipe the floor with them”,  to which he replied he was confident that the report’s findings would be upheld, and that it would be confirmed by the court as ‘independent’.

I asked him to tell me more about how he’d come to be employed by the council.  He responded that it was an interim position, all above board and he’d been employed through the SWIIS agency which provides care workers to councils and other public bodies.

In summary, I reminded him that if he ventured onto the Globe website, he’d learn that the date James Robinson’s mother died in 2010 was the same date he was employed (for services rendered?) by Wirral Council – exactly two years later.

….A most unfortunate twist of the knife.

This was met with silence.

A very telling and genuine post has been added to this Special Report article on the Wirral Globe website today: 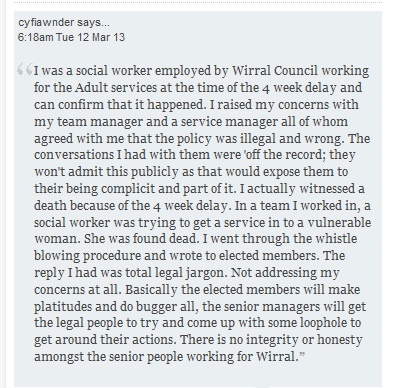 The following confidential report appeared on the Wirral.gov.uk website recently.  Presumably it’s no longer classified.  It appears here also, in very, very, very delayed response to a freedom of information request, made  nine months previously in May 2012.  The council’s quoted reason for the delay is… ‘internal publication / communication delays’ – which is all very unhelpful and all very vague:

For such an important piece of work, It’s disturbing that the range of persons approached and questioned during this so-called ‘investigation’ was extremely limited in scope…

What on earth were you up to Mr Vickers?  A Wirral lady was reputed to have died as a direct result of this delay.  This demanded a full, detailed and comprehensive approach, but all you appear to have achieved is a quick, cursory and highly selective look, resulting in a ‘glossing over’….

It turns out every single one of the chosen contributors was pretty much senior and office bound; a world away from the ‘sharp end’ and they’d also been heavily involved in designing, implementing or managing the delay – so would have held a close, vested interest in impact-minimising or defending ‘their baby‘.  Here they are:

None of the above would be likely to agree  that the delay was crooked, ill-conceived, callous or cruel to vulnerable service users; or designed to place financial savings ahead of care… whilst bigging up the people behind it.  They were after all paid in public money to either launch or manage the thing.  Soon after Andy Campbell blew the whistle, and the scandal broke, Rick O’Brien, widely believed to be the ‘brains’ behind it all, was off, rewarded with the senior role of “National Social Care End of Life Lead” in the NHS.

Which seemed like the perfect opportunity to ££work his magic on a national scale …………How caring.

As managers, they had a vested interest in ensuring it ‘ran smoothly’.  If it was illegal, and this expert confirms it as such…

Ed Mitchell, legal columnist for Community Care and editor of Social Care Law Today, said: “The courts will afford a council a reasonable period of time to put a care service in place as they recognise that services cannot be conjured up out of thin air.  But a policy of not even beginning the process of securing services until a set period of time has elapsed cannot be considered lawful.”

….then it’s highly unlikely that they would admit this to an outside investigator, when he turned up years later asking awkward questions.  No, they’d back it to the hilt, justify it, support it, maybe even praise it and say it was the best thing since sliced bread.  Which is basically what came to pass.

It’s the Mid Staffs scandal on a much smaller but still deadly scale – which ends in an insulting false consensus, and which, coupled with this helpline ‘investigation’, amounts to a copious glossing over of all the inconvenient facts.

The stench once again is overpowering, and the whole insulting charade looks like yet another in a long line of consummate Wirral whitewashes.  Done to conceal.  Done to frustrate.  Done to confound.

It got me wondering whether any hidden ‘prizes’ may have been handed out elsewhere, post report, in appreciation of a job well done – and as a reward for successfully drawing a blanket and reaching the ‘correct‘ findings – all against the odds, and in the teeth of massive local public opposition.

The council had already been labelled as a serial power abuser within the Smith report after all – for which accountability never arrived…. just empty assurances.  Many of the power abusers involved remain in office to this day.

Here’s an FoI request, designed to try and smoke them out:

The above report, coupled with this tragic news, now gives us much more than an inkling into how broken and unfit for purpose are Wirral’s Adult Social Services / Children and Young People’s Departments.

I’ll finish by dusting off a tired, year old call for accountability from March 2012 – which fell from the mouth of then council leader Councillor Jeff Green:

“Everyone who should be held to account will be.”

Read here how Wirral Council was found to have no “External Investigations Policy” to speak of.

With everything done behind the scenes, on a nod and a wink, Public oversight has been whittled right down to…

…“trusting those who think they know better”.