See the following links for more on the unfolding situation in Reading:

1 An emergency safeguarding message has been left with our representative on Wirral Council, Seacombe Councillor Adrian Jones – 4th June 2018

The following forms more background on Maura Noone (now Head of Adult Care at Reading Council) and Mike Fowler (now a senior finance executive at the charity Brook Young People).

Both were heavily involved in disabled abuse which occurred at Wirral Council over a period of many years.  Their eventual, protected departure arrived in January 2012, just days before the release of a damning independent report, which would have called for their heads if they hadn’t been allowed to bail out by complicit CEO James Wilkie.

Here’s a clip from Private Eye in November 2012.  It took us TEN long months to eventually squeeze this information out of Wirral Council – this being the precise amount of public money that the abusers shared as part of their generous leaving package – a total of £220,000.

Below, two screenshots from a truly EPIC FOI request placed with abusers Wirral Council, who took ten months to respond…

Following this scandal and others in Highways and Social Services, as part of the mopping up operation, more public money was rewarded to the abusive senior officers involved, who were suspended on full pay before being allowed to jump ship, £loaded £down.   These were individuals who were senior enough to “know where the bodies were buried” and therefore couldn’t be allowed to finger their own directors, complicit councillors or the CEO.  So the Wirral council tax payers’ deep pockets were raided again and again in order to protect the top crooks.  The total amount squandered went higher and higher, eventually breaking through £1 million ………….before climbing still further. 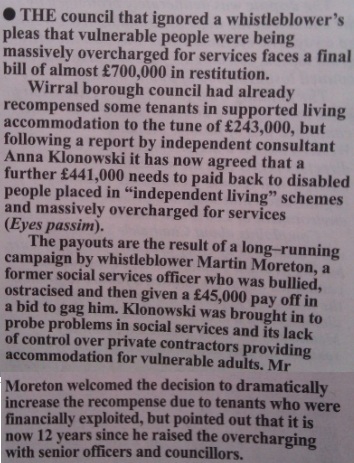 Even after they’d been caught out unlawfully charging learning disabled people for their Supported Living accommodation over a period of NINE years, the council deliberately downplayed the extent of the financial abuse and offered peanuts in reimbursement.  Three times they tried to get away with offering much smaller amounts and only succeeded in compounding their abuse.

A selection of Wirral Council pay offs (not exhaustive):

And finally… a Wirral Globe article from ten months after Fowler and Noone had fled:

…and one of the comments:

From 8 years ago today…in the Wirral News. 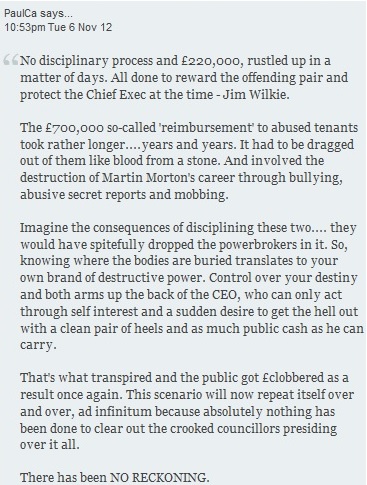 Below, two screenshots from a truly EPIC FOI request placed with abusers Wirral Council, who took ten months to respond…