Another name for a Compromise Agreement

Wirral Council produced and supplied the following table in response to an FOI request.

As you can see, the names have been withheld and it contains no absolute confirmation that Maura Noone and Mike Fowler were issued with compromise agreements.  We added their names in red because there is enough circumstantial evidence out there to confirm that they were muzzled inside these documents using routine gagging clauses, and that this occurred in January 2012.

The ‘production designer’ of this ‘Great Escape’ and he who made all this possible, former CEO James Wilkie retired with ‘ill health’ in June of the same year. 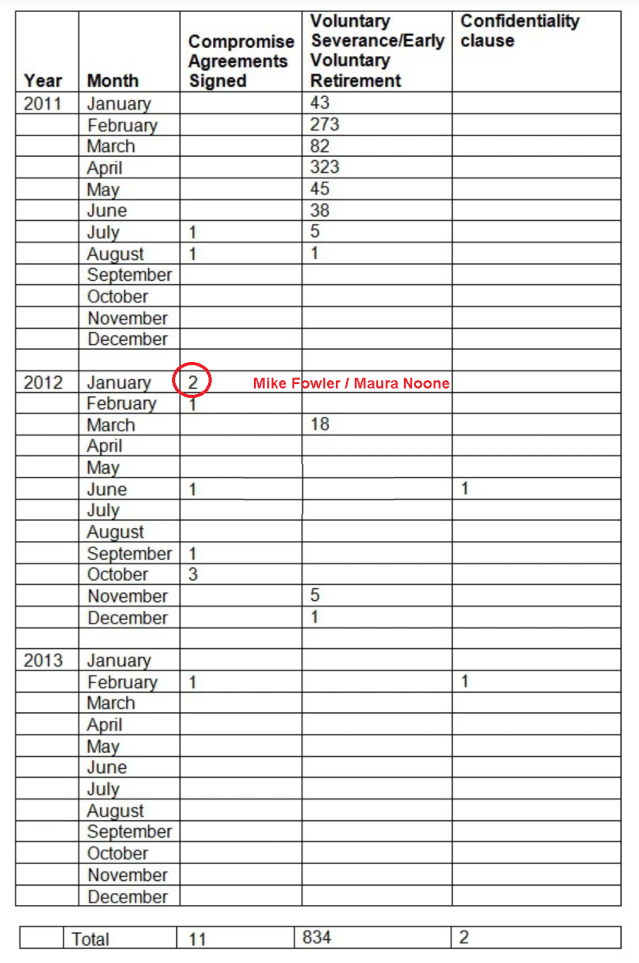 *Extremely* sharp-eyed readers will notice from the above table that Wirral Council lied, and failed to declare a compromise agreement issued to a former senior officer who was gagged* on 24th August 2013, thereby breaching Section 77 of the FOI Act.

Later, the controversial £48,000 payment at the heart of this was used by Frank Field MP as justification for paying off the #Wirralgate complainants in a thus far failed attempt to take the heat off him and his election agent, alleged racist and Deputy Leader of Wirral Council, Councillor George Davies.

There’s much more scandal [body-swerved for many years by the local and mainstream media] on Twitter if you search the #Wirralgate hashtag.

*The Employee and the Council confirm that they will keep the terms of this Agreement confidential, save where such disclosure is to HM Revenue & Customs, required by law or (where necessary or appropriate) to the Employee’s spouse / immediate family or legal or professional advisers, provided that they agree to keep the information confidential.

The Council and in particular the Council’s senior officers including HR and the Council’s Chief Executive (Graham Burgess) also confirm that they will keep the terms of this Agreement and the issues which led to the claim confidential to themselves, relevant Council senior officers and legal or professional advisers provided they agree to keep the information confidential and are able to do so lawfully.

Yes readers, you’re way ahead of us again…

1 An emergency safeguarding message has been left with our representative on Wirral Council, Seacombe Councillor Adrian Jones – 4th June 2018

7 Thousands endangered in Reading. Here’s the FOI request spelling it all out. Yet still… Wirral Council FAILED

From 8 years ago today…in the Wirral News.

9 Responses to Reading Council Safeguarding emergency. Confirmation of Noone and Fowler’s compromise agreements