This FOI request was lodged on 9th February 2017.

It concerns an important area of local authority spending and one which appears not to have undergone full and comprehensive audit, recommendation and scrutiny.

The importance of this area cannot be overstated.  Discretionary Housing Payments help to keep vulnerable and disabled people and their families – who are in receipt of Housing Benefit – in their homes.

Running this area incompetently, negligently or abusively would have a direct and adverse impact, could create severe injustice and could cause victims of council failure or malpractice to be evicted and potentially forced onto the streets.  To sum up with a rare (for this blog) political statement, Housing Benefit recipients qualifying for DHP are not ‘scroungers’ and need this benefit to survive.

During the recent Alison Mountney versus Wirral Council Employment Tribunal, the crucial area of scrutiny, the extent to which it has – or has not – been pursued, and whether it was generally fit for purpose featured strongly.  The impression we formed of Wirral Council’s scrutiny function, as an attendee to this case, was not a good one.

First is a summary box, listing the completed areas covered during the Audit Recommendations Period; April 2015 to October 2016:

On completion, the public would now expect recommendations to be made in all 5 areas.

Whilst the area of elections was vital to the Alison Mountney tribunal case, another area – Discretionary Housing Payments – apparently received no recommendations at all. Furthermore, whilst 4 areas listed the actions taken in the Outcome column, the DHP Outcome box was left curiously empty.  And further still, “no opinion provided” is the rather bland response to the crucial area of Organisational Risk.

Due to the glaring omissions, we’re left to wonder… what’s occurring here? 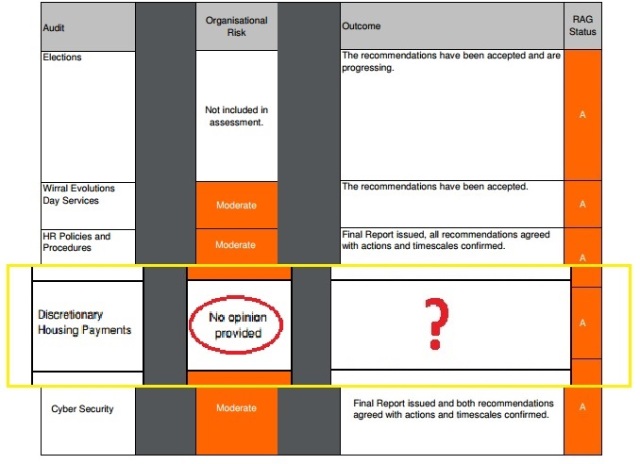 The FOI request is quite detailed because it needs to be, breaking down into nine separate areas.  If Wirral Council respond with a Section 12 exemption, to state that addressing it will take longer than 18 hours (or £450 based on the salary of an officer paid £25,000 p.a.), we will comply, rewrite it to suit, and try to ensure that the information can be found, set out and released to the public. 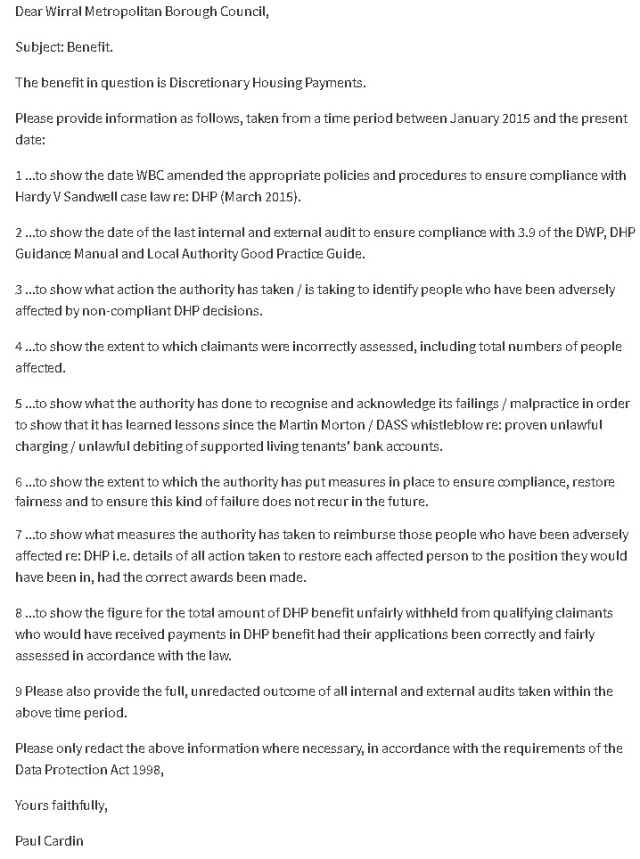