Wirral Council are wrong about the true number of compromise agreements

The headline above sounds a little peremptory doesn’t it?  A bit harsh maybe?  Accusing an organisation of getting it wrong?  What evidence can I possibly have?

And just to spell it out further, so you can see I’m not stooping to hurling empty accusations, magicked from thin air…

Earlier this year, somebody made an FoI request of Wirral Council, requesting totals for their compromise agreements and gagging clauses, which I covered in this post back in August 2013.

The council kindly provided a table which referred to compromise agreements, and so-called confidentiality clauses, that had been issued over a roughly 2 year period, January 2011 to December 2013: 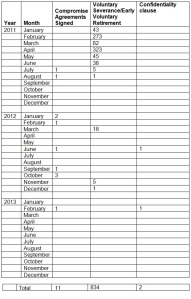 As you can see, down at the bottom, totals were provided.  It appeared to the waiting public that only 11, repeat 11 compromise agreements had been issued by the council.  Well, that’s what it said, didn’t it?

But no.  Here I’ll quote from the FoI response itself:

We now know, after many months of foreseeable and avoidable delay, that following the council’s response to this further FoI request, seeking clarity, and this 22nd November 2013 Wirral Globe article, the actual total is  11 + 834 = 845.

Wirral Council have not only erred on the true number of compromise agreements to another requester, but have repeatedly failed to answer Point 4 within my later request, which was the question asking them “How much?”

So…  off we go again to the Information Commissioner’s Office – who I imagine should find in my favour and ask the council to confirm that there were in fact  845 compromise agreements between January 2011 and December 2013 in total, and to release the public money costs information that was requested.

For good measure, I’ve lodged a subsequent request, asking for the identity of the law firm which gratefully received this bumper payment into its coffers, and the total of the money paid across to them (not including the actual cost of the compromise agreements, which has been requested separately within the ICO appeal).

… and the council that takes great pleasure in retorting…

…just haven’t got it in them to confirm it, and to thereby salvage the public money it’s going to cost to prise the damaging knowledge out of them.

Back with the answers soon I hope…