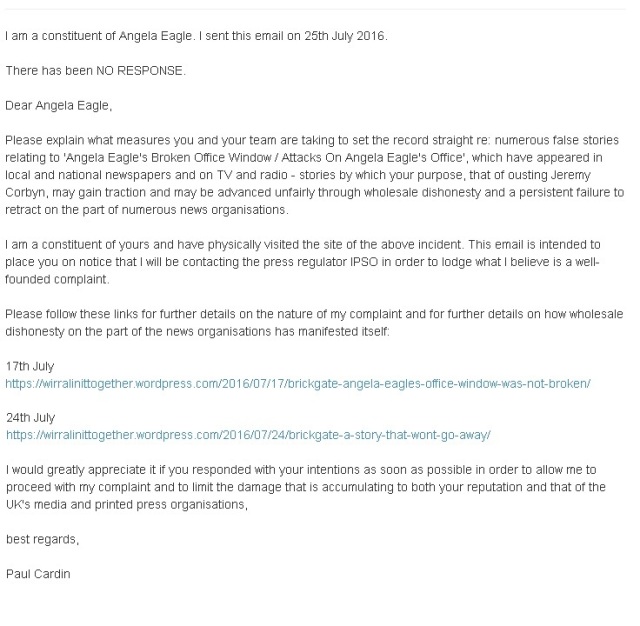 I had planned to wait for Angela’s response before lodging my IPSO complaint – just as a courtesy to her.  However, after failing to receive any response or acknowledgment I decided time was of the essence and went ahead, placing the first complaint – against The Daily Telegraph – with IPSO on 27th July, along with some supplementary notes:

I write further to our earlier email regarding your complaint about an article headlined “Angela Eagle told by police not to meet constituents as Jeremy Corbyn warns all MPs could face reselection”*, published by The Daily Telegraph on 21 July 2016.

*Check complaint above.  This was not the article I complained about.  The actual article was “Brick thrown through Angela Eagle’s office window after she announces Labour leadership bid”.

On receipt of a complaint, IPSO’s Executive staff reviews it to ensure that it falls within our remit, and represents a possible breach of the Editors’ Code of Practice. The Executive has now completed an assessment of your complaint under the terms of the Code. Having considered the points you have raised in full, we have concluded that your complaint does not raise a possible breach of the Code.

You complained under Clause 1 (Accuracy) that it was inaccurate for the article to report that Angela Eagle MP had a brick thrown through her Liverpool constituency office window as it was thrown through the communal entrance of a shared building. In circumstances where a brick was thrown through the window of her office building, the article was not misleading.  As such we could not consider this aspect of your complaint as a possible breach of Clause 1.

You are entitled to request that the Executive’s decision to reject your complaint be reviewed by IPSO’s Complaints Committee. To do so you will need to write to us within seven days, setting out the reasons why you believe the decision should be reviewed. Please note that we are unable to accept requests for review made more than seven days following the date of this email.

We would like to thank you for giving us the opportunity to consider the points you have raised, and have shared this correspondence with the newspaper to make it aware of your concerns.

We’ve spoken to Isabel this morning and she’s confirmed that the IPSO decision was made in error i.e. it was arrived at after analysing the wrong article, despite the fact that we’d clearly indicated which article we were complaining about by providing a link to it.

Which is all very frustrating as we’ve waited two weeks for this.

Today I received an apologetic email from the 4th person who’s dealt with this issue so far, Ciarin Cronin:

So that’s it…  again.  Regardless of IPSO’s inaccuracies i.e. the fact that Wallasey is not in Liverpool and the fact that the brick wasn’t thrown through ‘the communal entrance of a shared building’ (it was thrown through the window of a shared stairwell), I’ll be appealing.  Here’s my appeal for an executive review, placed today 16th August 2016:

I am writing to request that the executive reviews my original complaint.  Here are the reasons why I believe this decision should be reviewed.

i) The Press must take care not to publish inaccurate, misleading or distorted information or images, including headlines not supported by the text.

Angela Eagle’s office itself is on a different side to the building – the rear – furthest from Manor Road.  It is on a different side to the shared stairwell window.  I believe it is inaccurate to imply that the whole of the building can be regarded as “Angela Eagle’s Office” and to justify the reporting inaccuracies in these terms because the building is shared by 6 or 7 going concerns and has a shared entrance, reception and stairwell.

I believe it was careless and inflammatory of The Daily Telegraph to compound the inaccuracies by stating more than once that Angela Eagle’s office window had been broken by somebody throwing a brick.

The Daily Telegraph is a large circulation newspaper and to allow an inaccurate headline and the accompanying inaccurate statements within the body of the article to be published was irresponsible and was an unfair misrepresentation of the true situation on the ground at Sherlock House, Manor Road, Wallasey.

I believe it was somewhat irresponsible for The Daily Telegraph to plant falsehoods into the minds of its readers by failing to make adequate surveys when visiting the site and by failing to carry out adequate fact-checking and reasonable investigations upon receiving information from their own reporters, other news sources or social media, and to reproduce photographs with inaccurate captions, thereby failing to ensure that accurate facts and images were conveyed to readers instead of inaccurate, misleading information.

I believe it was deeply irresponsible for The Daily Telegraph to allow easily checkable falsehoods to be published, potentially allowing the outcome of the Labour Leadership ballot in September to be unfairly influenced.  Having read the inaccurate information, readers may unwittingly and unfairly apportion a measure of blame for these events to Jeremy Corbyn’s leadership campaign.  Leadership voters who areDaily Telegraph readers may have been influenced and had their minds swayed towards the other side.

I believe this situation was both foreseeable and avoidable on 12th July, the date of the article, and would not have arisen had the staff of The Daily Telegraph paid heed to good journalistic practice and their responsibilities as professional journalists under both the IPSO code and under their own newspaper’s code of conduct.

Had reporters visiting the site made approaches to businesses in the area e.g. The Royal Oak pub in Liscard village (opposite) and Chutneys Indian Restaurant (next door), they would have been informed that the area is a known trouble spot in the evenings.  The Royal Oak has had its licence up for review more than once in the past due to rowdy and violent behaviour by customers.  Chutneys Indian Restaurant have had their shop windows smashed on more than one occasion.  Had The Daily Telegraph’s reporters made full enquiries, doubts may have been placed in their minds with regard to the attack being politically motivated, and readers may have been spared the inaccurate reporting.

The Daily Telegraph does not appear to have reported any wider context in respect of crime figures for the Wallasey area. Here is a link to the Merseyside Police figures for criminal damage and arson: a total of 230 incidents in April, May and June this year:

Again, if this wider context on locally occurring crime had been followed up and included for balance, readers’ minds may not have been prone to jump to potentially inaccurate conclusions.

I believe it was careless and irresponsible and a breach of the IPSO code on accuracy to link the breaking of the stairwell window (the Angela Eagle office window according to the article) to the phone calls received by Angela Eagle’s staff for all the reasons described above, but particularly because doing so will have ‘cross-pollinated’ a similar degree of importance from the factually based threatening phone calls issue to the non-factually based ‘broken window’ issue.

I have reproduced The Daily Telegraph code of conduct below and have appended a red asterisk* alongside the standards I believe were breached:

1.1  Facts must be reported impartially, accurately and with integrity.*

1.2  Publications should take reasonable steps to ensure reports are accurate, fair and balanced.*

1.3  Clear distinction must be made between fact, conjecture, comment and opinion.

1.4  Try always to tell all sides of the story in any kind of dispute. Every effort must be made to contact all relevant parties.*

1.5  Do not knowingly withhold or suppress essential facts.

1.6 Journalists should not rely on only one source. Be careful not to recycle an error from one reference source to another.

1.7  Direct quotations should not be altered except to delete offensive language, protect against defamation, or to make minor changes for clarity.

1.8  Headlines and captions must reflect the tone and content of the article

1.9  Reports of new drugs or medical treatments must be considered with great caution. It is easy to raise false hopes or alarm among readers.

1.10 Information sourced from social media must be verified and checked for accuracy before publication on any platform.*

1.11 Editors must be informed of photographs sourced from social media sites.

1.12 Images prepared for publication must meet the guidelines of the Photographic Enhancement and Manipulation policy, outlined below in Section 18.

Quoting again from the IPSO Code of Conduct:

ii) A significant inaccuracy, misleading statement or distortion must be corrected, promptly and with due prominence, and — where appropriate — an apology published. In cases involving IPSO, due prominence should be as required by the regulator.

Due to the potential for the Labour Party Leadership ballot to be unfairly influenced, I believe the inaccuracies are of a significant and misleading nature.

The Guardian newspaper to its credit has recognised previous inaccuracies and changed some of its subsequent reporting to reflect the fact that the broken window was in a shared area of the building and was not ‘Angela Eagle’s constituency office window’ i.e. the inaccurate, untruthful interpretation.

As The Daily Telegraph’s (and others’) significant inaccuracies remain unchanged and unacknowledged, I believe it incumbent upon IPSO as the regulatory body to call for The Daily Telegraph to correct the inaccurate, misleading article of 12th July 2016 and any subsequent articles that carry and convey the same inaccurate information.  This should be done promptly, with due prominence and be accompanied by an apology to ensure that readers are made aware of the facts and to allow the Labour Leadership contest to proceed unaffected and unhindered.

This is an opportunity for IPSO to act.  Failure to do so will potentially result in the ballot being foreseeably, avoidably and unfairly skewed due to all the reasons described in detail above,

Campaigner for open government. Wants senior public servants to be honest and courageous. It IS possible!
View all posts by Wirral In It Together →
This entry was posted in General and tagged #Brickgate, Angela Eagle, Daily Telegraph, IPSO complaint, Jeremy Corbyn, Paul Cardin. Bookmark the permalink.