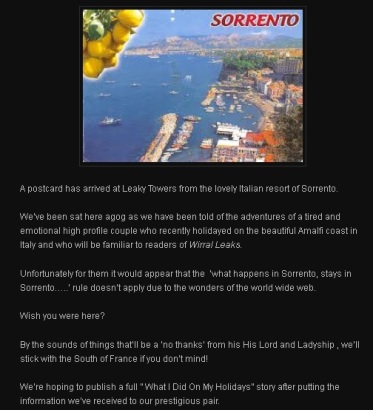 The 18th October 2017 Wirral Leaks post that started it all…

We thought a blog post on here would be a good place to ‘curate’ a number of #racism and alleged #racism tweets and list them for readers chronologically, as they went out.

The starting point was that infamous incident on a bus in Sorrento on 7th October 2017.  Then…

A post to the Wirral Globe’s Granty’s Inferno was given the “inferno treatment”, but instead of singeing the fingers of council racists, Granty’s colleagues were turning their fire on their public, censoring their readers and emptying their inboxes of anything that didn’t agree to whatever the unstated new code is for public contributions!  Obviously, anything connecting senior Wirral councillors to alleged #racism was not now permitted by these bold defenders of the ‘free and fair’ press.

Morning @wirralglobenews
A reminder about an important comment to your newspaper that was censored the other day, concerning alleged #Racism pic.twitter.com/FXCFTP8AIR

Not content with simply erasing posts reporting criminal alleged #racism, the Wirral Globe then went one step further and decided that it was time to  run their local ad-sheet like a local alehouse.  The clear message here was, “You will not be allowed to upset our customers, so…  Yer barred !!”

Me, banned for 2nd time by @wirralglobenews
This time, it's criticising their ongoing failure to report "inconvenient truths"#AllegedRacism pic.twitter.com/BofYcWwuRE

This personal “raising of the drawbridge” against us happened on exactly the same day that the Bishop of Liverpool used the local rags to ask for UK authorities and media institutions to examine their closed off culture, listen to the public, take on our concerns, be more empathic, open and transparent and stop being an obstacle to justice where there have been catastrophic official failings, followed by calculated cover ups e.g. Hillsborough 1989.

Join Merseytravel/ Merseylearn today Wear red and show you are against all forms of racism .. pic.twitter.com/9zyK8EaP4Y

@ Wirral council last night The Reader read a poem 4 equality and all held up a red card . WBC united against Racism pic.twitter.com/rN9hz6IGap

Racism is on the rise . Education is the answer . We should challenge all forms of racism #awml2015

Councillor Norbury Quote… “We should challenge all forms of racism”.

But lately, the same Labour councillor, Tony Norbury – along with ALL of his colleagues, to a man and woman – have chosen to be silent rather than address two very clear forms of #racism that may have occurred slap bang in the middle of their own local party!!

As the apparent figurehead for all things #Racism, we felt the blatant hypocrisy of Councillor Tony Norbury, he of the “Show racism the Red Card” staged photo opportunities and the earnest, attention-seeking public tweets, was leaving a bit of a foul aftertaste.

So in the highly unlikely event that he had not heard about his party colleagues i.e. Elaine Foulkes alleged #Racism in Sorrento, and Deputy Council Leader George Davies’ alleged #Racism on the #Wirralgate audio recording, we took time to make sure that he became fully appraised of the details…

"The darkness around us is very deep"

He should have added a p.s.

Where alleged, criminal #racism hides beneath a concealing blanket of PR gloss and window dressing, masquerading as a "Zero Tolerance, principled stance".

And in response to Councillor Norbury’s #Racism poem, which he read out to the assembled throng of po-faced, deeply dubious and shifty characters seated around him in the Wirral Council chamber…

A Wirral member called Tony,
Presented some rhyming baloney,
But when #Racism's danger ,
Is HERE in this chamber,
His lines are hollow and phoney.@TonyNorbury2@phil4wirral

…at one point, we stopped to have a ponder on what has gone so hideously wrong at the local newspapers and attempted to evaluate and unravel the What, Why, When, How, Where and Who of taking a decision not to report an alleged crime involving members of the local Labour Party to your local public.  Please click the link…