15 months ago, I placed the following FoI request with Wirral Council.  It’s a pretty straightforward query, asking them about the public money cost of their compromise agreements – those desperate gagging clauses that shut people up before they finally move beyond your ‘sphere of influence’.

They messed me about, presumably in a failed attempt to wear me down and dispose of me.  As usual, it didn’t work and I’m still here, banging on the Town Hall door well over a year later, hoping that they’ll hearken to the calls of Phil “Open and Transparent” Davies, the Council Leader, and discharge their statutory obligations by answering the request in full.

This query concerns a large number of ‘voluntary’ redundancies, where the council decided it would be a fine and honourable use of public money to gag all 834 members of staff that were being dumped – presumably to protect the council’s reputation and prevent them from ever spilling the beans on some of the outrageous abuse / misconduct / malfeasance / bullying / general thuggery that they’d experienced during their long days of despair and desolation, being ground beneath the council jackboot.

The council responded that having local council tax payers’ interest at the forefront, they’d struck a bargain with an anonymous external group of vultures and had negotiated a lower price to do the sordid deal.

The answer was trotted out and apparently it would only cost us 834 x £75 or a trifling £62,550 to stitch up and gag the lot of them, from senior manager right down to lollipop lady or lunchtime attendant.  These bogus figures were even reported to the wider public via the Wirral Globe about a year ago.

After this article was published, the council said absolutely nothing, and by their silence, were happy to allow the fraudulent declared numbers (obviously much lower than the real McCoy) to spread, register and sink into the minds of the wider Wirral public.

I’m a suspicious sort, and at the time, doubted that they were being honest with me.  I envisaged that not all the gagging agreements would cost £75.

I imagined some of them would have special terms within them that might very well inflate the price – and that the solicitors involved might be sweating and toiling for as much as an hour or two drawing these up, unlike the £75 a throw bargain basement ones, where “Sharon” would be packed off to the photocopier (at £6.50 an hour) to spend her time running off several hundred copies, tippexing out names and inserting new ones.

I appealed to the ICO, and so it came to pass.  Check out this Decision Notice which arrived today, confirming my worst fears: 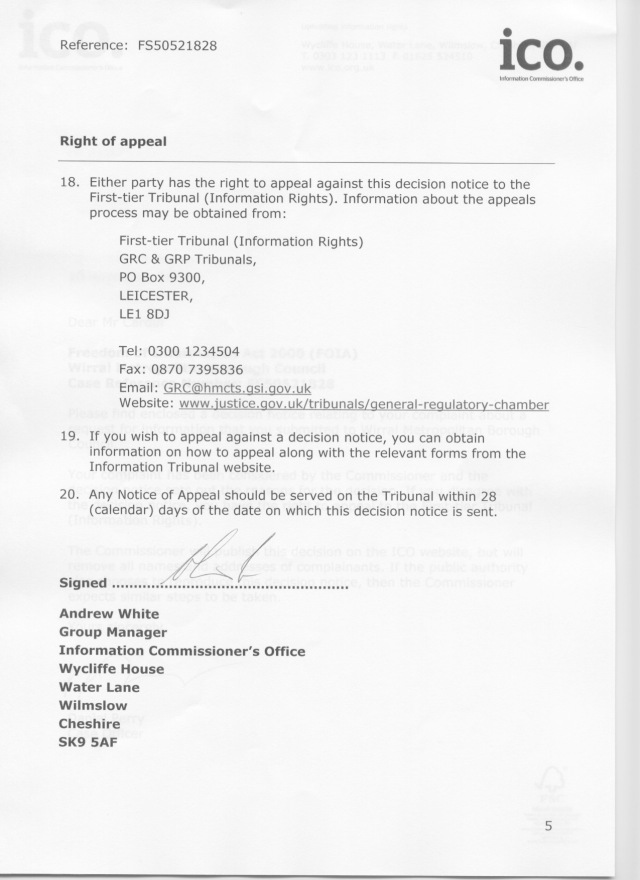 So, the improved council lied, and left us all to assume that the correct sum would be £65,550 – when in reality the trough of public money had taken a somewhat larger battering, courtesy of a hungry, circling pack of anonymous external solicitors.

But how much larger was it?  We’ll have to wait a little longer.

They now have 35 calendar days to come up with something resembling the truth.

So much for the careful stewardship of Wirral Council’s senior staff, with the public interest always close at heart, eh readers?

By the way, I have it on very good authority that although the ICO are pleased to splash dark, foreboding words across their documentation, they have NEVER ONCE IN NINE YEARS followed up their threat to land a failing data controller with contempt of court proceedings.

It’s just hollow and meaningless brinkmanship, done to make them look tough.  Haha. In fact, I’m becoming more and more familiar with these people’s scams and wheezes as time trundles on.  And they flatter to deceive far too often for my liking.

My prediction is that the council will respond just before time runs out – with days or hours to go, and with something bland and unremarkable – the ICO will puff out its chest, dispense a ponderous endorsement of the council’s actions, and we’ll all go home.

Even if the council misses the so-called ‘deadline’, nothing will happen, and they know that.  They rely on it.  Proper enforcement action, although solemnly invoked at frequent intervals, is just a ‘bridge too far’ and way too scary for the ICO’s wet blankets to ever get to grips with.

Campaigner for open government. Wants senior public servants to be honest and courageous. It IS possible!
View all posts by Wirral In It Together →
This entry was posted in FoI Requests, General and tagged FoI request, ICO, Wirral Council. Bookmark the permalink.