This brief encounter with our first and only internet troll started way back in May 2012.  “eVirtual_Assist’ is our former Twitter user name.  We’d been up on Twitter for a while, doing what we do, exposing the neverending scandal and the part played in that scandal by unaccountable officers / councillors at Wirral Council.  Then along comes an anonymous person with an axe to grind.

We quickly blocked and never responded, but this didn’t deter.  Here’s how the ball got rolling… 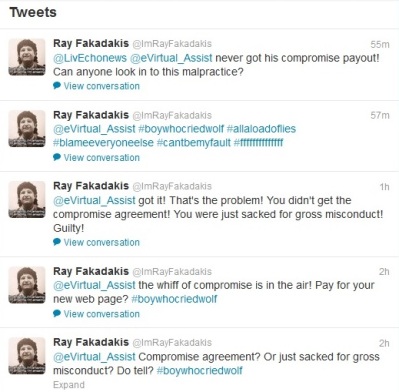 Warming to this theme, he / she was back a few days later:

He / she then had a rest for a week and came back with renewed vigour…!

More?  Yup… A gap of four months, and just as we were starting to really miss him / her…  bang !

And finally came a rather woeful coup de grace…

I scratched my head for a while, wondering who this might be.  But soon, things started to gel and become a little clearer.  The person doing the trolling appeared to have knowledge of very specific information; information which your average timewasting, nothing better to do, bored out of his / her brains trol would have no way of knowing.

Thinking even further back….. I was sat at our my final hearing in late Summer 2003, accompanied by our T&G union rep. As the session went on, I watched as the trumped up “Gross Misconduct” charges collapsed around us one by one.

This concerned a married female colleague of ours, who was very closely involved in the financial “shenanigans” that I’d blown the whistle on, which had been occurring for many years on a regular basis.

Link to video, explaining much more

Once word had gotten around that I’d been suspended, and the coast was clear, she’d evidently made a beeline for the managers dealing with our case, bearing ‘fruit’.

This turned out to be a story about us approaching her at a Christmas party the December before, making lewd suggestions, being threatening, and generally making a nuisance of ourselves.  The fact that this incident had occurred 8 months previously, without being followed up at the time or ever since, appeared to be of no consequence to David Green (Director of Highways). And Green’s colleague also Garry Owen, ( an ex-UNISON turncoat), seemed to be very keen to overlook the 8 month-delay and to make these charges stick.

Anyway, when my union rep and I walked into the room at the start of the hearing, there they both were, behind the desk, heads down, carefully consulting their notes.  Eventually, they looked up with pained expressions, named this female colleague of ours and began speaking forth in sombre tones, describing an incident at a Christmas party.  And so, in this grave manner, they began to level a detailed charge of ‘sexual misconduct’.

After setting the scene, they then turned to matters of context, and how our female colleague had described us as some sort of ‘weirdo’, who made her feel ‘nervous’ and ‘shaky’ and generally ‘gave her the willies’ (for want of a more appropriate phrase).  I allowed them to finish their piece and started my response by saying…

“I have a question for you.  Would you like me to describe the inside of her house?”

“Well, five months ago, just before I was suspended, I was in work, it was coming up to dinner time and Mrs X took me to one side and to my surprise, invited me back to her house, which is just around the corner.  She said it was, “to help her with some printing.”  She knew how confident I was with IT, and hoped that I could help her.  The printing job was some sort of “fitness routine” for a gym or health club she was a member of.  I thought it was a little unusual to be asked, and I was a bit wary, but after some persuasion, I agreed to accompany her home.  We went in her car, just the two of us, and I did what she’d asked me to do. It was very easy and straightforward.  Now…  would you like me to describe the inside of her house?”

“Er, no thanks Paul.” spluttered Mr Green, “Forget that one.  We’ll move onto the next charge…”

Campaigner for open government. Wants senior public servants to be honest and courageous. It IS possible!
View all posts by Wirral In It Together →
This entry was posted in General and tagged David Green, Garry Owen, Paul Cardin, Troll, Twitter, Wirral Council. Bookmark the permalink.