Wirral Tory / Independent antisemitism? Not reported in newspapers or media 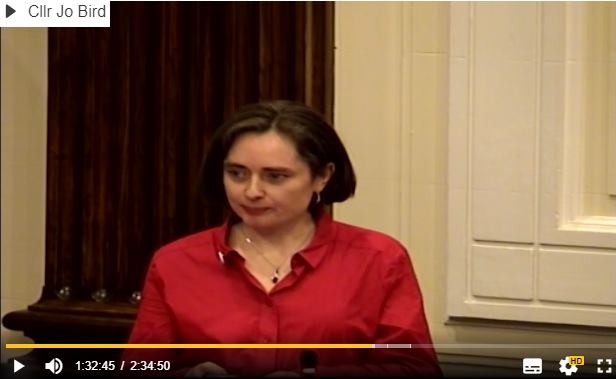 We de-platformed ourselves from the hideous Twitter yesterday. All links to our tweets are now broken.

A reminder of what happened in March 2019…

The background to this issue

This is covered in more detail in the following tweet which we have pinned to the top of our Twitter timeline.  So far it’s had a great deal of interest, which is ongoing.

The above link  takes you  to the officially broadcast coverage of the meeting and from time to time, we will refer to key moments with a red time-stamp to indicate the event.

During this meeting, Councillor Ian Lewis – Wirral’s Tory leader – raised an official motion aimed at silencing and removing the freedom of speech of Bromborough / New Ferry Jewish Councillor Jo Bird who had recently been suspended by the Labour Party on charges of “anti-Semitism” – [see 01:21:53] at the above link.  Jo Bird was reinstated with all charges thrown out 11 days after this meeting.

Here are some Wirral Tory councillors, embargoing a Jewish Labour Councillor and walking out as she begins to speak about her experiences of anti-Semitism and her own family's persecution during the holocaust.@MichaelRosenYes pic.twitter.com/mIaxplIt7b

Ian Lewis used a little-known and completely inappropriate section of Wirral Council Standing Orders (Section 12(13) – which had been written with the intention of quelling unruly or offensive councillor behaviour.  This action was dishonest.  We suspect Councillor Lewis knew the likely outcome beforehand – that it wouldn’t succeed.  The key words used here are…

“I move that a member be not heard.” 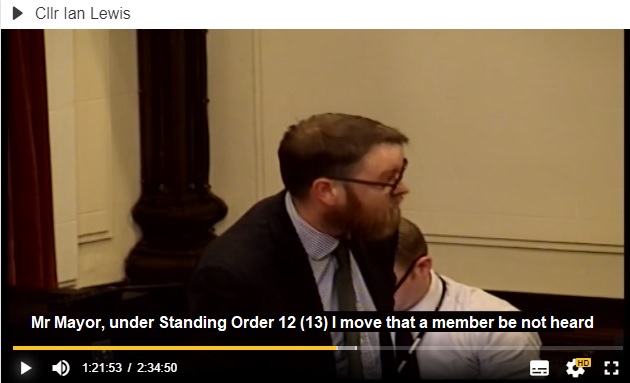 Here are the appropriate guidelines re: raising Section 12(13):

In the following circumstances, under Standing Order 15, the Mayor or any other member may move “that the named member leave the meeting immediately”… 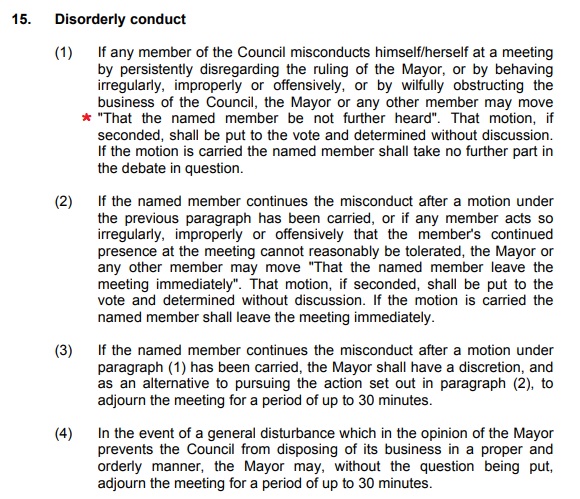 Nowhere during this meeting did the intended target of Ian Lewis’ motion – Jewish Councillor Jo Bird – “misconduct herself, persistently disregard the ruling of the Mayor or behave irregularly, improperly or wilfully obstruct the business of the council, such that her continued presence at the meeting could not reasonably be tolerated”.

We believe, despite respected Liberal Democrat Councillor Phil Gilchrist’s intervention, [see 01:22:19 to 01:25:13] that the Conservative Mayor, Councillor Geoffrey Watt and his legal adviser – the Director of Law and Monitoring Officer Mr Philip McCourt – made a gross error of judgment in allowing this motion and the subsequent vote to go ahead.  Not least, Philip McCourt whose specific failing was to place the decision “in the gift of the Mayor”.

Because Ian Lewis knew or should reasonably have known Councillor Jo bird to be a Jewish councillor, his actions in raising this completely inappropriate motion and in “using a sledgehammer to crack a nut” were both anti-Semitic and discriminatory and therefore in contravention of the Wirral Council Members’ Code of Conduct.

We do not know for certain, but we suspect that never before will this motion have been used to silence a councillor, except in situations that require it, i.e. unruly, irregular, improper, offensive behaviour – at the actual meeting – which obstructs the business of the council or disregards the authority of the Mayor.

The outcome of the vote

This all too predictable failure then gave Ian Lewis’s party the excuse they needed to grandstand, get up and walk out of the chamber en masse.   Video evidence shows that Independent councillors and “for” voters Chris Meaden and Moira McLaughlin left the chamber together [see 01:31:54 to 01:31:56].

Here is the speech made by Councillor Jo Bird

“I’m sorry that the Wirral Conservatives feel the need to leave the chamber at this point.  You will not be able to hear the voice of Bromborough and New Ferry residents, nor my apology for my words being misunderstood…”

“…thank you, it is unfortunate that the Conservative members have chosen to leave, thereby depriving their own residents of their voice in this chamber.  And I’d like to address everybody, fellow councillors and residents of Wirral.  I nip out during the Christian prayers here partly because I’m Jewish.  My great-grandparents were refugees from ethnic cleansing and fascism in Europe.  My grandfather never knew his cousins because they perished in the Holocaust.  I know from lived experience…

…Jewish people looks like, and it’s vile.  Just today I received anti-Semitic hate emails.  I was told that it is time for Jews to leave the UK, that I’m low-life, go and crawl back under your rock, and that I’m a Nazi.  And actually what gives me nightmares these days are political moves to the right and the far right, for example, Conservative leaders like Theresa May, creating what she herself calls a hostile environment for migrants who enrich our country, such as the Windrush generation.  And we’ve seen just right now the hostile environment created by Conservatives in the Wirral.  It is Labour who have led every piece of anti-racist legislation in this country.  As you know, at our last council meeting, this birdy has a self-deprecating sense of humour and I’m sorry if any offence has been caused by my plays on words.  That was not my intention.  As councillor for Bromborough / New Ferry, I welcome the proposed budget and the much-needed fund for New Ferry.  The fund will help to rebuild lives and the livelihoods of people and traders devastated by the gas explosion almost two years ago.  Thank you all for your support.”

Sharp eyed readers will have noticed that Independent councillors Chris Meaden and Moira McLaughlin, who voted for the motion walked out after Jo Bird mentioned her family’s persecution during the holocaust.  To our mind this makes them both clearly anti-Semitic, along with the Tory leader Ian Lewis whom, although he departed before Jo Bird began her speech, discriminated against Councillor Jo Bird at the outset by raising an inappropriate motion aimed at removing her freedom of speech.

Jo Bird’s original offence was the use of some puns and wordplay at a Manchester meeting that offended the Jewish Chronicle, whom it appears must have assigned one of their journalists to go back in time, comb through dated information and look for anything that might be deemed controversial or “anti-semitic” behaviour.  Or there is a possibility that it was a malicious leak.  Who knows?

Whether it is possible for a Jewish person to be anti-Semitic is highly uncertain.  Some context is required.  Jewish film star Woody Allen, self-deprecating Jack Benny and many other prominent Jews have produced wonderful and memorable cultural output; films, comedy, TV series, etc. adding a wealth of richness to our own culture, all of  which have never to our knowledge attracted counter-allegations of “anti-Semitism” from any quarter.

In the same spirit of harmless self-deprecation, and as recently as 2016, the Jewish Chronicle itself produced the now infamous headline below, which referred to Woody Allen’s wonderful film Annie Hall, remarking “Jew know why we love Annie Hall?“

In other words, making precisely the same pun on the word “Jew” that Jo Bird made.  Given the current climate, and the fact that the Jewish Chronicle criticised Jo Bird for her “Jew process” quip, this can only succeed in raising concerns about the Jewish Chronicle’s sincerity and the true intent of its own motivations.

So in normal circumstances, i.e. prior to September 2015 – when Jeremy Corbyn became leader of the Labour Party – nobody of sound mind nor nursing a vendetta would have had any problem with Jo Bird’s comments.

So we’re forced to examine the broader context, which suggests to us that large sections of the UK mainstream press and media and outlets like the Jewish Chronicle may have been feigning the whole thing and are desperate to avoid a Corbyn government, one which would be in a position to finally clamp down on tax avoidance / evasion estimated at £34 billion in 2016.

A position which makes many powerful enemies.

Check out the following two graphs from Google Trends

Our inescapable conclusion from the above two graphs is an obvious one to draw.  Ever since Jeremy Corbyn became Labour Leader, the party went from strength to strength as the coups failed, the leadership bids collapsed, his popularity soared and thousands upon thousands of new members joined, making Labour the largest political party in Europe.

Then, as our offshore, tax-avoiding, billionaire-owned press and media recognised a threat to their empires, a large segment of their output resorted to the use of periodic, bogus anti-Semitism campaigns and vendettas which targeted the Labour Party and the Labour Party alone.

Here, Google Trends is picking up on the online newspaper headlines, the articles, the TV and Radio online references, the social media outpourings and the torrents of utter bilge masquerading as journalism.

Google Trends is also correctly failing to register the same factors where the Conservative Party are concerned.

The strong showing for Labour is compounded by the contributions of not very bright, blue-ticked celebrities, with millions of dumbed down people in tow, hanging on their every word and whose sheer numbers on Twitter, Facebook, Instagram and elsewhere add a kind of false ‘credence’ to it, boosting the fake “newsworthiness” of it all.

It’s disturbing to see that very rarely do any politicians, celebrities or media proprietors approach the police with evidence to support allegations of anti-Semitism, which is after all a crime.

So why not?  We believe this is due to an inherent fear of the police failing to find any evidence and pressing counter-charges of wasting police time, which is an actionable offence.

The average risk-averse journalist, politician or celebrity bringing unwarranted allegations to the police would also perceive the danger of having their approval rating hit or their career damaged or destroyed.

So the status quo continues, ensuring that woefully thin on content smears or insinuations are taken to the newspapers, TV and Radio stations, given the spin treatment, fattened up, splashed across social media, and the whole sorry circus marches on…

It’s going to take fair-minded, dignified people avoiding the MSM, the press, switching off the TV news, doing their own research, educating themselves and coming together to get the true message out there if we are ever going to turn this sordid situation around.

8 Responses to Wirral Tory / Independent antisemitism? Not reported in newspapers or media