Tory Voters in Wallasey and beyond. You’re being taken for fools

***If you live in the North West and recognise any local Tory councillors’ faces in the following photographs, please tweet us @Wirral_In_It with the details.  Many thanks !!***

Theresa May kicked off her 2017 snap General Election campaign with what could be the start of a whistle-stop tour of the UK.  The first visit was to Bolton of all places – a northern Labour stronghold.

Predictably, there weren’t many locals there to welcome her as the Prime Ministerial helicopter touched down in a field.  Which was good for them because crowds of interfering busybodies may have spotted the deception that was about to be played out behind the backs of the British public.

It appears the #ToryElectionFraud that you’re never going to hear reported on the BBC has not caused the media billionaires’, toffs’ and bankers’ party to break their stride when it comes to deceitful behaviour.

Wallasey Councillors on a day trip

Three Wallasey Ward Tory councillors – Lesley Rennie, Ian Lewis and Paul Hayes must have received an urgent message from No 10 Downing Street or Tory Head  Office telling them to drop their brandy glasses, pull their sensible brogues on and hotfoot it to Bolton asap on 20th April 2017.

Presumably, transport will have been laid on to get them there, although we can’t be sure about that.  Maybe they shared somebody’s car and will reclaim the mileage and expenses?  But it appears from the photo below that numerous unknown Tory supporters (councillors also?) had received the same message and needed to drive, sprint or get taxis, pronto, to the Egerton church hall for the event.

We imagine that wherever the next study in media manipulation is, a different Wirral Tory ward may receive their marching orders.  It makes you wonder what would happen to a councillor refusing to take part in such scandalous activity? Presumably, judging by the chumps packing the tiny church hall, Tory councillors possessing dignity and principles are pretty hard to come by these days.

We followed Councillor Paul Hayes, a Brian Blessed lookey-like, on Twitter, but very quickly the shutters came slamming down:

We then tweeted Councillor Ian Lewis for his point of view, but so far he hasn’t responded:

Dear Councillor…@ianlewis675 …how does it feel to be exploited & dispensed with? All as part of an elaborate deception?
Public service?

So for now, we’d ask any Wallasey Tory voters reading this…

“Are you happy to see your party’s funds squandered whisking councillors off on a day out to Bolton to pull a fast one and pose for the cameras, masquerading as locals?  All for the sake of filling the local newspapers and their websites with fraudulent publicity shots conveying the false idea that the people of Bolton are falling over each other to grab 5 more years of austerity under the Tories.”

Reporters in attendance were not permitted to ask any questions.

Despite the BBC and their ‘reporters’ clamping down on any and all negative Tory news – and not just during elections – will you yourself still be prepared to give your personal mandate to the party of #ToryElectionFraud this time around?

Do you actually still trust these people?

Link to video from Bolton News (scroll down)

If you live in the North West and recognise your local Tory councillor’s face here, please tweet us @Wirral_In_It with the details.  Many thanks !! 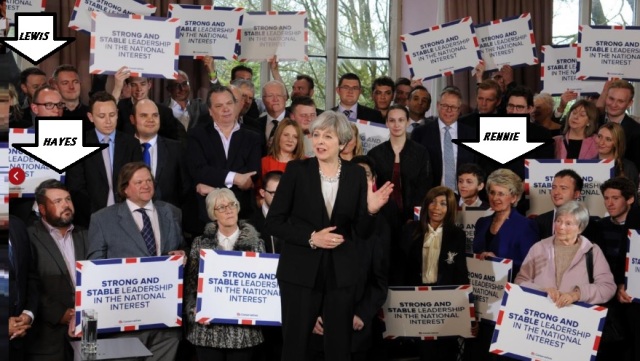 6 Responses to Tory Voters in Wallasey and beyond. You’re being taken for fools