As Wirral Borough Council forks out £1.3 million – ‘Transformation’ is the watch-word 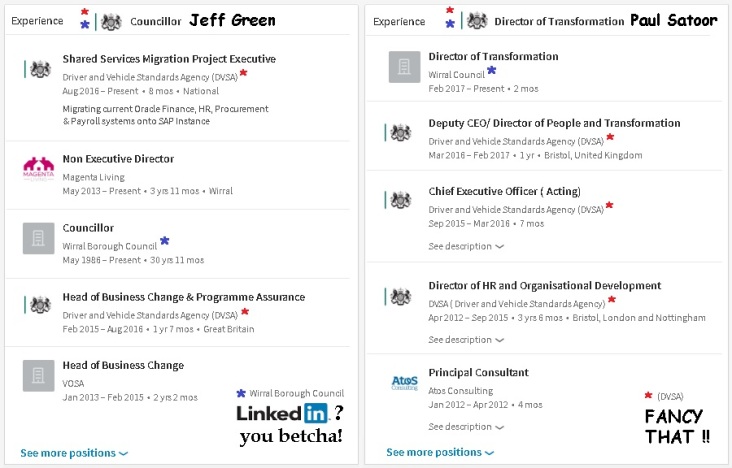 Following this recent article in the Wirral Globe…

…it’s becoming clear that despite crushing austerity for us mere mortals, large gobbets of council tax money are being magicked up to create highly-remunerated senior posts, some apparently permanent, some not, some appearing to conflict with each other, but all done on a wing and a prayer in the hope that ‘savings’ – not swingeing cuts – can be made at some unknown point in the future.

Councillor Jeff Green, leader of Wirral’s Tory party can be seen pouring forth in earnest in the above article, “raging” long and hard about the unfairness of all this … almost – but not quite – to the brink of making himself look ‘electable’.

However, when we dig a little further, no questions appear to have been put to Councillor Green about the exceedingly cosy-looking circumstances of one person’s good fortune.

This arrived publicly last November – in the form of a very high-ranking permanent job – endorsed and seconded by Green’s deputy, Councillor Leslie Rennie.

The new ‘Director of Transformation’ is ATOS ‘cast off’ Paul Satoor, but whaddyaknow – he’s Green’s former colleague at DVSA, the Driver and Vehicle Standards Agency – see the above LinkedIn testimonials for more.

Satoor’s appointment is also where a measure of confusion (not simply suspicion) has been introduced.

The Wirral Globe article refers to a ‘temporary Head of Transformation’, yet Satoor appears to have been appointed as permanent Director.

So is Paul Satoor NOT the head – permanent or otherwise – after all?

Admittedly, it’s difficult to come to any hard and fast conclusions, but for us, the Tory “opposition” leader having a former workmate slotted in permanently on £139,080 (with the aid of his own party deputy) is highly suspect and very much gives the lie to Jeff Green’s publicised ‘criticisms’ trotted out for full effect in the obedient Wirral Globe – who appear to be simply content to have their scoop fed to them and ticking the usual reader outrage boxes, no questions asked.

If any further suggestion is needed that all is not  well, and that the cancer of hidden incestuous relationships may be spreading its tendrils beyond Brighton Street, take a look at some fortuitous screencapping we did a few days back: 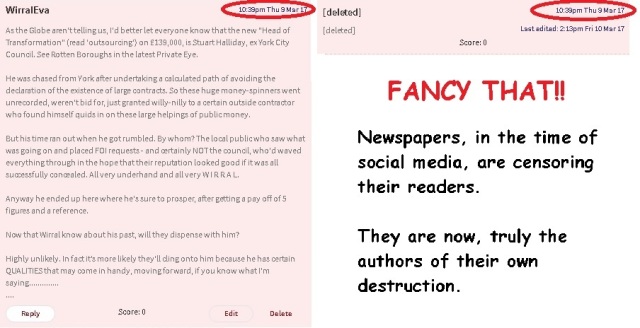 This contribution (to the same article referred to above) was deleted, presumably by the on-duty web ‘editor’, who must see it as part of their role to get rid of posts which breach the stated guidelines.  Fair enough.

It was not true that Stuart Halliday moved to the Transformation job.  But did the Wirral Globe know that?  This is the role we now think (despite the confusion) was taken up by Paul Satoor.

According to the old stalwart, wonderfully erudite and reliable blog Wirral Leaks, it seems York City Council “contract killer” Mr Halliday may have landed a job which pays far more than the £139k Transformation role or for that matter, the meagre £70k pay packet he struggled to scrape by on when forging an unusually eccentric path at laissez faire, easy-going York City Council.

Due to the siphoning twin-vacuum long settled on Wirral’s broken version of ‘openness and transparency’, very few breathers of Wirral’s oxygen are totally sure what’s going on yet.

But as good, clean, public money gets grudgingly funnelled in for its Wirral Council ‘reverse laundry’ treatment, shall we see what dirty items churn forth at the output end?

It seems to be the only way to drag these shadowy figures – and whatever the colour of their election day rosettes – occupants of their own self-sustaining personal fiefdoms out into the open.

The @WirralCouncil gravy train is firmly in our sights…

3 Responses to As Wirral Borough Council forks out £1.3 million – ‘Transformation’ is the watch-word