A “Gandhi-like Revolt” – against the DWP

My fellow Wirral whistleblower Nigel Hobro has been in touch with what could one day amount to a ground-breaking proposal.

Salve Paul,
In 2014 I had occasion to be referred to Ingeus on the Work scheme program. Basically I attended on interview but found work and I was for two years plagued by Ingeus for contact.
It struck me that the urgency of their phone calls, their attendance at my house TWICE might indicate, rather like Wirralbiz, that they be tempted to cheat a la A4e.
I asked DWP for the personal details of any claims made by Ingeus on my account-since they only had one initial interview. I will receive the data on 19th April as per the mailed letter to me from DWP.
It struck me that these ridiculous schemes “Back to work” etc would be stopped in their tracks by each individual unwillingly subjected to them requesting their personal data.
DWP would think twice about contracting such organisations, and the same be deterred from fraud, should each person request the data by FOI.*
A kind of Gandhi-like revolt
Vale

*Nigel placed his request on 7th March 2017 via the whatdotheyknow.com website.  Staff at WDTK correctly concealed it from public view as it contained personal information, and were kind enough to relay it onwards to the DWP as a ‘personal data’ submission.

So rather than be placed at the mercy of the DWP, Nigel set about taking a measure of control back – and gaining some leeway for himself.

He’d lodged what is known as a Data Protection Act “Subject Access Request” – albeit via an FOI channel – which is now with data professionals at Ingeus – all in accordance with the DPA 1998 – in order to gain access to the personal data and information that they hold on him.

It looks like he came in for special attention – with more than one home visit.

In other words, this was costly attention, probably motivated by a financial incentive into the groaning Ingeus coffers when the time arrived.

That’s how these things are arranged sadly. It’s referred to in classic literature as “getting one’s pound of flesh”.

And data controllers, i.e. the public and private bodies subject to this law have a clear statutory obligation to respond and provide your personal data within 40 days.

There is no getting out of this and nowhere for them to hide, unless you threaten the reputation of an employer council, like we once did.  But that’s rare.  In normal circumstances they have to cough up.

Imagine if one day, a powerful movement was created whereby just 25% of targeted and oppressed unemployed citizens turned the tables on their oppressors and bound them up in the minutiae of responding in detail to a Subject Access Request every single time, all justified, not vexatious, done for serious purpose – and for correct and noble reasons and fully in keeping with their statutory rights and the law of the land?

We’ll be returning to this subject very soon after Nigel receives his information on 19th April.  Please stay tuned ! 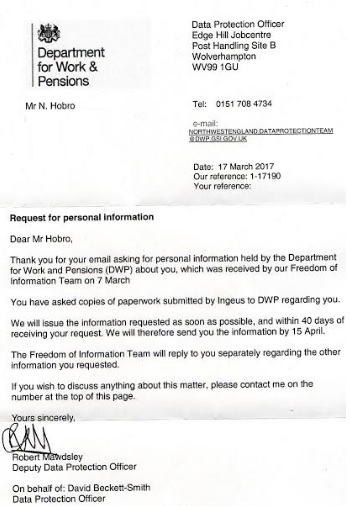 6 Responses to A “Gandhi-like Revolt” – against the DWP